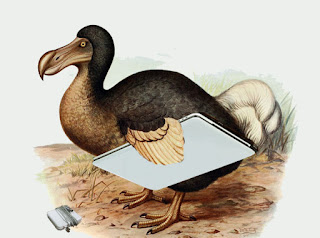 Sometimes pending change is difficult to imagine much less accept. That's okay for you and me but we expect something a good deal better from those who would govern us. That's why we give them a share of our income and the power to employ the experts that we, individually, could never afford so that the near future could be revealed to them and enable them to act for the common good.

The "common good." I know. I typed that with a straight face but I couldn't stifle the laugh more than a few seconds. Oh well.

Here's the thing. There are credible arguments being made that we are on the verge of major change. One of these changes is said to be the approaching end of the internal combustion engine. As someone who grew up with the car culture, living not far from America's Motor City, the demise of the gasoline or diesel powered auto isn't easy to accept but I could be wrong.

Back in 2015, Trump's favourite investment bank, Deutsche Bank, released a report predicting a bright future for solar power. The bank cautioned investors to think twice about putting their money into conventional (coal, oil and gas powered) electrical utilities predicting they could be going the way of the Dodo bird. As solar panel and electrical storage costs fell, the bank's consultants envisioned a world, including relatively sun-free Germany, where the average householder would generate his own power, enough to supply all of the family needs and charge the affordable family electric car.  Sure enough, solar panels have been falling in price. No argument there.

According to a study from RethinkX, an independent think tank in San Francisco, greater demand for electric cars, coupled with increased demand for ride sharing, will eventually eliminate the need for dealerships altogether.

The authors of the report — technology investor James Arbib and Stanford University economist Tony Seba — aren't the first to prognosticate the death of dealerships, but it is the speed with which they think it will happen that is notable.

They believe it will occur in the next seven years.

It's the "radically lower cost" of ride-sharing and electric vehicles that "really drives the speed and the adoption scale of this disruption we're forecasting," said Arbib.
...

Arbib and Seba believe that due to the composition of an electric engine, people will spend less time bringing in their cars to dealerships for repairs and servicing.

According to the Canadian Automobile Association, the average cost of maintenance and repair on a gas-powered car is just over $1,000 per year, or $0.07 per kilometre. This number goes up depending on the age of the vehicle and distance travelled.

Electric vehicles could last longer. Right now, Tesla is offering infinite kilometre warranties. Arbib expects the lifetime of these vehicles to be about 500,000 miles (approximately 800,000 km) in the early 2020s, and potentially a million miles by the end of that decade.

500,000 miles? For a lot of us that's a lifetime of driving and the idea of doing it in an affordable, emissions free car that you fuel up at home from your solar panels is, frankly, irresistible.

And why, if this information is credible, is our federal government (and our western provincial governments) so frantically doubling down on bitumen extraction and export. That's entirely counter-intuitive.

Jeez, wouldn't it be great to have those questions answered?

Mound, I think the answers to your questions have to do with NAFTA which tied Canada too closely to American business interests. Canadian politicians are so worried about trade with the US that they behave like courtiers, constantly bowing and scraping. If they think the Americans want stupid, then Canadian politicians do stupid.


I can't dispute your take on this, Toby. Wish I could.

Anyong...been saying that for years.

To think that Canada, being next to U.S.A., can behave as "fully" independent country while Empire rules the rest of the world (-Russia and China), is a delusion.
A..non

What I want to know is why, assuming this report is credible, are there not any attempts being made to improve all other types of consumer products?
Like: shoes; home appliances; furniture; clothing; plumbing; electrical wiring; personal use items ....?

Seven years to takeover seems awfully bloody fast for something that hasn't yet cracked 1% of the market. I expect and hope that electric cars will start grabbing market share from internal combustion, and the sooner the better, but I don't see how it can happen that fast. Especially since there will be a backlog of old cars getting serviced for some years to come.
There just aren't a lot of electric cars on the market yet, they're NOT cheap yet, and the types and models are very limited--only a few niches, appropriate to early adopters who want cool factor, are covered.