The Emperor May Have No Clothes But Going Along Can Go a Long Way. 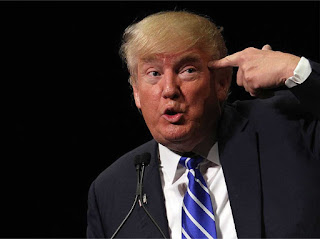 Aviation Week is not a magazine you would think of as anti-establishment - except, perhaps, when it comes to Donald Trump.

The table of contents of the May 18th edition had this eye-catching entry: "U.S. defense contractors are learning to use Trump's blowhard tendencies to their advantage."

President Donald Trump’s tendency to brag about his negotiating prowess has defense industry officials in a tough spot, caught between the White House and the facts on critical national security programs. But as long as they stay on his good side, the major defense contractors are learning to use the new president’s bluster to their advantage.

“Defense contractors have learned to make the unpredictable predictable again,” says Richard Aboulafia, an analyst with the Teal Group. “Once they realized this was not a negotiation but rather an opportunity to give Trump credit for things that didn’t happen or other people’s hard work, they were rewarded handsomely.”

The clearest example is Boeing’s replacement Air Force One. Despite Trump outright accusing Boeing of trying to swindle the government and then claiming credit for savings on a contract that does not even exist, the company has so far declined to contradict the White House. When asked about Trump’s conflicting messaging, Leanne Caret, chief of Boeing’s defense arm, says simply: “We are still not on contract for the presidential aircraft recapitalization program.”

It is not only Boeing—Lockheed Martin has also been in the line of fire over the controversial F-35. Trump has repeatedly slammed the program’s “out-of-control” costs and at one point threatened to replace it with Boeing’s nonstealthy F/A-18 Super Hornet. But like Boeing, Lockheed has declined to defend itself time after time, even praising Trump for his commitment to saving taxpayer dollars.

But after 100 days and counting of Trump’s tough talk, there has been no substantive negative impact on any defense contractors, says Byron Callan, an analyst with Capital Alpha Group. In fact, quite the opposite: Boeing, Raytheon and General Dynamics shares are at all-time highs; Lockheed and Northrop Grumman are within 1-2% of all-time highs. In the latest earnings calls, major defense companies raised or reiterated guidance, Callan notes.

“If it’s tough, the markets aren’t buying it,” he says. “This is theater. There has been zero evidence of a detrimental impact on cash flows, profit expectations, program wins/loses.”

“Boeing is building a brand-new 747 Air Force One for future presidents, but costs are out of control, more than $4 billion. Cancel order!” Trump tweeted.

Speaking to reporters at Trump Tower after the tweet, the president-elect doubled down, saying, “it’s ridiculous” that Boeing’s new Air Force One is so expensive. “I think Boeing is doing a little bit of a number,” he said. “We want Boeing to make a lot of money but not that much.”

Then in February, after several meetings with Boeing CEO Dennis Muilenburg, Trump bragged that he personally saved more than $1 billion on the new Air Force One. Since then the White House seems to have revised that estimate, extolling the president for capping the cost of the new aircraft “at millions below that which was agreed to by the Obama administration.”

The problem is that, as Caret said, Boeing does not yet have a production contract for Air Force One. To date, the U.S. government has only awarded the company a total of $170 million for risk reduction and other preliminary work. Contrary to the White House’s statements, the Obama administration never agreed to a final price on Air Force One.
...

So far, Boeing’s strategy seems to be working. Trump “completely reversed himself once he was given credit for an imaginary cost cut on Air Force One. All of a sudden that became a totally fine program,” says Aboulafia. “That’s where flattery comes in. . . . It’s just a question of how to manage someone who is a bit mercurial.”

On the F-35, Trump has continued his trend of taking credit for saving the taxpayer millions of dollars. This time, the savings are real—the government cut about $700 million in the latest F-35 contract—but Trump has repeatedly exaggerated his role in achieving them. “A little before I took office, there was a terrible article about the F-35 fighter jet. It was hundreds of billions of dollars over budget. It was seven years behind schedule. It was a disaster. So I called in Lockheed and I said, ‘I’m sorry, we’re going to have to bid this out to another company, namely Boeing,’” Trump said in a wide-ranging interview with the Associated Press in April. “I saved $725 million on the 90 planes.

“We went from a company that wanted more money for the planes to a company that cut. And the reason they cut—same planes, same everything—was because of me. I mean, because that’s what I do,” Trump continued.

But the truth is that the Pentagon and Lockheed have been working to cut costs on the F-35 for years. Cost information provided by the F-35 Joint Program Office shows the average unit price has been steadily decreasing since the first low-rate initial production (LRIP) lot in 2007. The Pentagon already expected to save about $600 million in the latest production lot before Trump was inaugurated.

Trump’s vocal criticism of the F-35 program over the past months no doubt left a strong impression on Lockheed management and likely had a hand in speeding up negotiations of the most recent contract. But the bottom line is that Trump inserted himself into the negotiating process at the last second and is now taking credit for years of work by the Pentagon and Lockheed Martin.

But just like Boeing, Lockheed has refused to contradict the White House, and the company in fact praised Trump for his commitment to getting a fair deal. “We appreciate President Trump’s comments this morning on the positive progress we’ve made on the F-35 program,” a Lockheed spokeswoman said Jan. 30. “We share his commitment to delivering this critical capability for our men and women in uniform at the lowest possible cost to taxpayers.”

I never expected a publication such as Aviation Week to ridicule a sitting president as a "blowhard" but they did and proceeded to how America's defense contractors learned to play Trump for a, well, a chump.  Trump-grade narcissism is a genuine weakness, a national vulnerability when the afflicted is the president. America's adversaries can and probably will exploit this strategic vulnerability just as America's defence contractors have revealed it.

.. I may have to frame that..
The Aviation Weekly cover, beside that contents page.. thanks .. !