What If... Britain Had Won America's Revolutionary War? 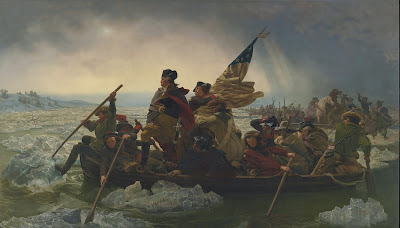 Did America really "win" the Revolutionary War in 1776? Just what exactly did it win?

That question is pondered by Neal Pollack, the self-described "Greatest Living American Writer since the dawn of American letters" in today's Salon. His essay is entitled, "We could have been Canada."

When I was a child, the notion of a civic society, born from a social compact written by men wearing wigs, girded our intellects and our loins. But now our loins have begun to soften somewhat. Perhaps that’s because of the gig economy, or incipient fascism, or both. Plus we can always blame millennials, and we’d be right. In the meantime, a slow awareness has dawned slowly. We’ve begun to realize that another reality might be better. Fortunately, other realities are opening up every day.

Most profoundly ...is the scenario where the British won the Revolutionary War and America never ceased to be a colony. In Canada, for instance, students are taught from an early age that England is the mother country that feeds us with her delicious cheese. So let’s imagine a similar scenario: In 1770, instead of getting all bratty and slicing people up with bayonets, American colonists had instead just said, “Fine, tax us whatever, just please don’t fund any more Ricky Gervais projects.” Today, we’d all be drinking top-notch tea and singing “You’ll Never Walk Alone” after watching Liverpool matches. And we’d definitely be up for a couple of weeks in Spain. We would have National Health Insurance, refer to French fries as “chips,” and there’d be an old queen with a Netflix show where she’s depicted as a super-sexy young chick married to Dr. Who.

I think, at this point, we all agree that it would be better to be England than America, as long as we get to keep California and the nicer parts of Colorado. America, thanks to its fake historians, has historically imagined itself a nation of homesteading rebels. But come with me through the portal, and you will see that the entire time you were really just a British pussycat grown fat on clotted cream and sunshine.

That is what it will take for this once-great nation to shake off the lugubrious weight of autocracy. We cannot depend on institutions that have been institutionalized, cannot depend on leaders who don’t lead, and, in the end, we cannot depend on Depends themselves, because everything and everyone leaks. Like many of my fellow writers, I long to rejoin the British Empire, or at least to get a book deal that argues the case. For, as Winston Churchill once wrote in “The Endless Sentence,” his history of England, “When, in fact, great nations gather under history’s storm, harrumph harrumph harrumph.” Or, as the British King Arthur put it in “The Legend of the Sword,” the recent documentary film, “Cheerio mate. Jolly good. Off you go to the loo!”

Of that we can be certain.

Sorry, Neal, too late for do-overs now or weepy pleas of contrition. We'll hear no buyer's remorse from the cheap seats. Besides, our side won the War of 1812, the war that ensured we didn't have to become you and, of that, we can indeed be certain - and grateful.
Posted by The Mound of Sound at 1:00 PM

There has long been some discussion among historians as to why the English let the Americans win. If the English had really wanted to they could have clobbered the Colonists. Yes, the English were distracted, as usual, by their conflict with the French. Even so, there seems to have been an element of apathy on the part of the English. There were thirteen unique colonies showing little interest in getting along with each other. Maybe they saw American independence as an opportunity to get out from under administrative costs while capturing the lion's share of trade.

As you said, Mound, it's too late to cry over lost opportunities.


What I find interesting in this discussion is the notion that Canada and the United States somehow developed in some symmetry. Nothing could be further from the truth and Canadians should be eternally grateful for the distinctions.

The Brits developed their American colonies as plantation states with quasi-criminal forced labour. Professor Nancy Isenberg explores this in her book, "White Trash, the 400 year untold history of class in America." It's easy to see why Britain never had the same designs on its Canadian colonies. Factors such as the French presence in Quebec, the fur trade, Canada's remoteness and climate, slowed Britain's expansion into the northern territories - the establishment of towns, road networks, lines of communication, etc. This prevented us from being subject to the same type of exploitation. If you read "White Trash" you should get a sense of how grateful Canadians should be that Britain got her predatory teeth sunk into the American colonies fully two centuries before it got around to Canada.