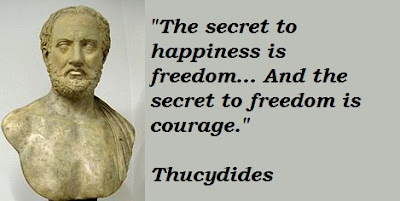 You'll have to go back to the fifth century B.C. when the Athenian, Thucydides, looked at Athens and Sparta and pondered whether an aggressive, rising power challenging a dominant power could ever have a peaceful outcome.

Graham Allison's book, "Destined for War: Can America and China Escape Thucydides Trap?" looks to the past for insights on our near future.

History, according to Allison, isn't encouraging. There have been sixteen of these occasions. Twelve of them resulted in wars. Twelve for sixteen or two for three is terrific in baseball but a lousy result in geopolitics. From Bloomberg:


For three-quarters of a century, the U.S. has been the dominant world power. China is now challenging that hegemony economically, politically and militarily. Both countries, with vastly different political systems, histories and values, believe in their own exceptionalism.

The two nations, Allison argues, are "currently on a collision course for war," which he says can be averted only if both demonstrate skill and "take difficult and painful actions to avert it."

I've known Allison for almost four decades. He's been sweeping in and out of government, serving five Republican and Democratic administrations from Washington and his perch at Harvard. He's a first-class academic with the instincts of a first-rate politician. He brings to the "Thucydides Trap" an impressive sweep of history and geopolitical and military knowledge. Unlike some academics, he writes interestingly.

Allison analyzes why so many rising powers ended up in wars with established ones, and why some didn't. The best contemporary examples are the German rise that led to World War I contrasted with the confrontation between the U.S. and the Soviet Union, which was kept from escalating into hot war for more than four decades.

The rise of China offers a classic Thucydides trap. In 1980, China's economy was only a tenth the size of the U.S. economy. By 2040, Allison reckons, it could be three times larger. China considers itself the most important power in Asia, irrespective of U.S. commitments and alliances with allies in the region. With President Donald Trump presiding over a White House hostile to international institutions, Chinese President Xi Jinping has at least a claim on the title of premier global leader.

Allison depicts plausible scenarios of how conflicts between these two superpowers could break out: disputes over Taiwan or the South China Sea, or an accidental provocation by a third party -- it was the assassination of an Austrian archduke by a Serbian terrorist that triggered World War I -- or, less likely, a quarrel related to economic competition.

Allison isn't a pessimist. He argues that with skillful statecraft and political sensitivity these two superpowers can avoid war.

Xi is a ruthless autocrat, but a smart one with a sense of history and China's customary patience.

In the U.S., by contrast, the current commander-in-chief shows little interest in history and is irrational, insecure and impulsive.

My take?  I doubt that China's economy will be three times larger than America's by 2040. For a host of reasons - geopolitical, demographic, environmental and ecological - I suspect China may be already close to her zenith.

This reminds me of a paper I read a couple of years ago written by three prominent Chinese academics in which they explored growth and the Chinese government's options for controlling it. They noted that the entrepreneurial class in China and India aspire to Western affluence as do the remainder of their populations. However, given the sheer size of those two countries' populations, there are not nearly enough resources on this planet to provide that standard of living.  The only solution to this paradox they foresaw was to create "islands of affluence" floating atop a sea of relative poverty. This would require iron fist policies to suppress social upheaval over inequality facilitated by the politbureau. That's a major destabilizing event and internal instability can result in external aggression.

Factors such as these may actually increase the risk of conflict between major powers especially should the Chinese pursue a "lebensraum" policy through southeast Asia and Asia Pacific.

.. on the spectrum of fabulists .. Trump is the absolute bottom.. The fables he blows out his arse are astonishing, constant & undefendable. But he just doesn't care.

On the spectrum of absolutism he's hysterically ignorant & up near the top. On the subject of war? He has no idea, other than 'if we have nuclear weapons, why don't we use them?' He sees things in black or white, no gradient or shading in between. Whether the JOS will obey a legal but fatal directive from the Commander in Chief is a deep dark question. We're talking about a completely ignorant dickhead who may schedule a trip to a golf course, while sending troop movements off to war. Does he really have an inkling of how war, strategies, consequences unfold? No. And neither do any of his 'brain trust' - family - or cabinet. They think in terms of jets dogfighting, tanks rolling, guns firing.. & victory eh! Yes they get what Harpoon missiles can do.. but don't realize adversaries like Russia and China also have boomers, aircraft carriers, jamming and advanced interlocking fire control systems. That modern warfare will be conducted from 'over the horizon' is well beyond them.. as is the end result of radioactive barrens & dead ships with dead crews drifting against foreign or American shores

China is running out of water & has poisoned their farmland. Its also bursting with an overwhelming population. Talk about expendables, as was the case in Russia, the general population will be abandoned to their own devices. India in much the same boat.

Just the other day, an associate told me in those countries, excluding Russia, there are no train schedules to or in/around developed urban centers. Trains arrive every 30 seconds and depart accordingly. That's the 'schedule' since up to 6 million workers flood the cities daily then exit after work!

This is the territory of 'The Upside of Down' & the collapse of empires.. the tipping points you often mention, long passed & ancient history. Add war to the equation, even limited tactical nuclear weaponry & its the end of the world as we know it. Disintegration, exodus, famine. Trump, the GOP et al are the perfect ingredients or 'accellerants' to light fuses & fan the resulting flames. Pence may even be worse.. he's such a stooge & dazed or faux evangelical thug. Where on earth do such complete losers think a massive refugee exodus will eventually head long term? To England? No. People with nothing.. need water, space, soil.. that sounds to me like North & South America.. Trump of course will be long gone, could go at any minute.. no no.. not to a country club.. but up there in the sky with an invisible friend.. some sort of benevolent & welcoming god who buys his staggering bullshit.

Sal, any damned fool with a bent psyche can launch a war. It takes a statesman to chart a safer, more productive course. Trump is no statesman. He is devoid of a scholarly nature. He must reduce everything, especially a problem, to a level of simplicity that approaches childishness. He meets adversity with tantrums. Good luck to us all.

And, unfortunately, Trump's Secretary of State is no statesman, either.

"should the Chinese pursue a "lebensraum" policy"...
They already doing it.
Richmnond, B.C. is just one example.
A..non

No, it really isn't. God, I know that the private has become uniquely privileged nowadays, but could we get real? A bunch of individual rich Chinese dudes dodging their taxes and laundering their money does NOT constitute expansionist policy by the Chinese state.

Thucidydes had some great advice . . . well, really, he quoted Pericles' great advice, which the people of Athens ignored to their cost (and which Hitler ignored to his cost, and probably plenty of others over the years). Came down to: Pick one fight at a time. Don't get arrogant and think you can handle everyone at once.
I think the Americans have been ignoring that one too, and will continue to. And it'll cost them, sooner or later, likely sooner.