How Hot Is It? 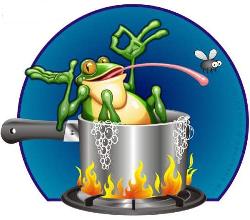 Too damned hot for planes, that's how hot.

Officials at the Phoenix, Arizona airport say 40 flights have been cancelled because some airplanes aren't designed to fly when temperatures hit 49 degrees Celsius today. The superheated air is just too thin to generate enough lift for airliners such as Bombardier's CRJ class.

It's a well-known problem - a 2016 report from the International Civil Aviation Organization (ICAO) even warned that higher temperatures caused by climate change could "have severe consequences for aircraft take-off performance, where high altitudes or short runways limit the payload or even the fuel-carrying capacity".

Those problems are why many countries in the Middle East, and some high-altitude airports in South America, tend to schedule long flights for the evening or night, when it is cooler.

Today's cancellations at Phoenix airport come just a day after the publication of a new study from Dr. Mora at the University of Hawaii warning of a significant increase in heatwave intensity and frequency around the world.
Posted by The Mound of Sound at 8:55 AM

Fiddling while Rome burns is the image that immediately comes to mind here, Mound.

Anyong....bring it on....the more the better...then just maybe people will want to do something about it.

The problem with most aircraft is that they rely on brute force just to stay up.

Hot air gets too thin for big jets to fly. Those ads for cheap flights to sunshine holidays don't mention that.

Yes, Lorne, it's hard for anyone to dispute your argument. This is just one example of how our political caste is choosing to ignore what's happening regardless of the perils and damage being sustained. The more distant from the equator, the easier it is for political leadership to look the other way - but not for long. With the current political posture in Canada, whether Liberal, Conservative or New Democrat, it won't be long before we too are overtaken by events because they chose not to heed the gathering calamity.


Anyong, I don't know if waiting for a bottom up movement capable of forcing change will work but I suspect we're going to find out.

Toby it's not just jet airliners that are affected. Light aviation is in the same situation.

And yet the world will need more pilots

The Mound of Sound said, "Toby it's not just jet airliners that are affected. Light aviation is in the same situation."

Hot weather is no problem for Russian pilots...
https://www.youtube.com/watch?v=ThoZNxy2JZk
A..non