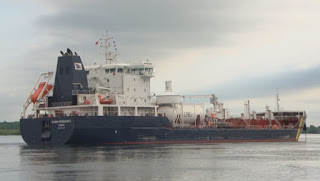 A brand, spanking new oil tanker has grounded in sand near Cornwall in the St. Lawrence. Fortunately the weather is clear and the waters of the St. Lawrence are placid where the tanker Damia Desgagnes now sits at anchor.

The tanker was travelling west from Montreal to the Lake Erie community of Nanticoke in Ontario when the engine failed, according to Serge Le Guellec, the president of Transport Desgagnés, a wholly-owned subsidiary of Groupe Desgagnés.

After the engine failed, the ship drifted and ended with its nose grounded on sand about three nautical miles east of Iroquois, Ont., Le Guellec said.

The tanker is less than a year old, and Le Guellec said it only recently launched from a European shipyard. It's not known what caused the engine failure.

The good news is that the Damia Desgagnes is a lake tanker, not an ocean going behemoth. It's resting safely on a sandy bottom and not imperilled by rocky coastlines and underwater projections of the sort that ripped the bottom out of the B.C. Ferry Queen of the North and sent her to the bottom 600 feet down.  And all the little tanker has to contend with is the steady current of the St. Lawrence, not by treacherous Pacific storms, tides and currents.

The lesson is whether it's the Damia Desgagnes or a supertanker heavily laden with dilbit as it navigates through treacherous waters, engines can fail, steering can fail, fires can occur along with many other hazards that can cause a ship to flounder.

And that's why we don't want an armada of hazmat supertankers laden with toxic bitumen plying the very difficult waters of the Pacific coast.