Look At It This Way, Tomorrow's Cold Will Be Today's Hot 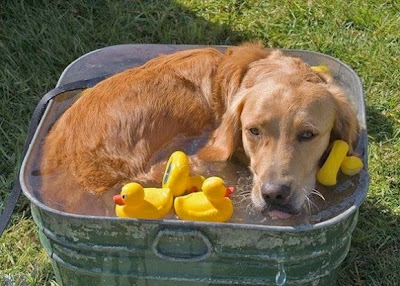 If we continue our rapacious consumption of fossil fuels, tomorrow's "cold" will resemble today's "hot."

Researchers at the University of Hawaii conclude that, from roughly 2047 onwards, the coldest years in any given place will be hotter than the hottest year recorded between 1860 and 2005.

“The coldest year in the future will be warmer than the hottest year in the past,” said Camilo Mora, the lead scientist on a paper published in the journal Nature.

Unprecedented climates will arrive even sooner in the tropics, Dr. Mora’s group predicts, putting increasing stress on human societies there, on the coral reefs that supply millions of people with fish, and on the world’s greatest forests.
“Go back in your life to think about the hottest, most traumatic event you have experienced,” Dr. Mora said in an interview. “What we’re saying is that very soon, that event is going to become the norm.”

If you're a young person, Dr. Mora offers another way to look at it.  Within your lifetime, whatever climate you were used to at the outset will have become a thing of the past.  In fact, anyone who still has a clear recollection of the 60s knows full well that climate is already a thing of the past. 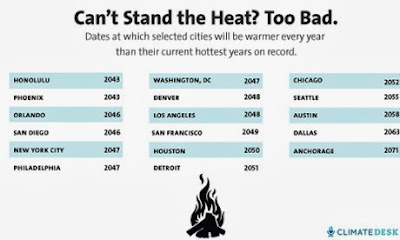