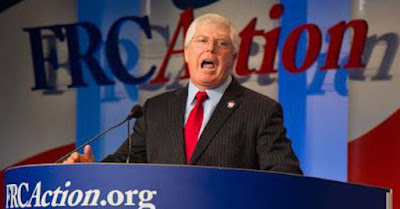 Some people go out of their way to be in-your-face ugly. One such group is the American  evangelical non-profit, Liberty Counsel, a group fiercely opposed to gay rights.

The U.S. Senate last month unanimously passed a bill that would explicitly make lynching a federal crime. Not everyone, however, is pleased with passage of the Justice for Victims of Lynching Act.

Liberty Counsel, an evangelical nonprofit that opposes gay rights, and its chairman, Mat Staver, are taking issue with the bill’s inclusion of LGBTQ people.

"The old saying is once that camel gets the nose in the tent, you can't stop them from coming the rest of the way in," Staver said in an interview with conservative Christian news outlet OneNewsNow. “This is a way to slip it in under a so-called anti-lynching bill, and to then to sort of circle the wagon and then go for the juggler [sic] at some time in the future."

Staver told OneNewsNow that his organization, which has been labeled an anti-LGBTQ “hate group” by the Southern Poverty Law Center, is lobbying lawmakers in the House to have them remove the bill’s “sexual orientation” and “gender identity” language before taking a vote.

Similarly, the group encouraged Congress in November to remove language about "sexual orientation" and "gender identity" discrimination from a trade agreement with Mexico and Canada.

In 2016 Ass-hat Mat and his gang pulled their support from the First Amendment Defense Act when they realized it not only protected their bigotry but also the rights of the LGBTQ community.  The bill was just not hateful enough for Liberty Counsel.


Liberty Counsel explained why it abruptly stopped supporting the sweeping federal legislation. As it turns out, the anti-LGBT legal nonprofit that represented antigay Kentucky clerk Kim Davis and a host of other right-wing dissenters wasn’t all that worried about religious freedom. It appears the group was instead primarily concerned with making sure individuals, businesses, and federal contractors could discriminate against LGBT people without “punishment” from the government.

“For the first time, the federal government under the proposed FADA will formerly [sic] recognize and condone same-sex marriage on par with the natural marriage,” read Wednesday’s press release. “Liberty Counsel can no longer support FADA unless the proposed amendment is abandoned and FADA returns to its original language of marriage being between one man and one woman.”

Liberty Counsel founder and chairman Mat Staver went on to “urge all members of Congress to reject the proposed amendments to the First Amendment Defense Act that include same-sex marriage,” promising that “pro-family” organizations will not be able to support the legislation unless it singles out same-sex couples for legalized discrimination. The antigay language in FADA is “necessary to protect people of faith,” Staver concluded.

In Canada, Liberty Counsel articles are a staple on Canada Free Press.

The not so religious right` are the most dangerous and powerful organisations within the USA.
Trump is quite aware of this and panders to them at every moment.
These born again bigots are Trumps storm troopers who will take to the streets with their AR15's at the merest suggestion of Lord Trump.

Ronald Reagan gave these idiots purpose and a voice.
Shutting them up will be as difficult as persuading them that the sun doesn't revolve around the earth.


It strikes me, TB, that we'll either have to find some means to purge this hateful extremism or else ostracize them from civil society. That starts by driving home the point that there can be no freedom of religion for anybody unless there is first freedom from religion for everybody. Religious fundamentalism of all stripes is a scourge to progressive democracy and a real danger to peace and security. It's a net sum pursuit. Success, for fundamentalists, is achieved through the reduction of the freedoms and rights of "others."

Exactly right, Mound. My father came out of that mess that was Northern Ireland and he always told us kids that in his opinion, organized religion was just another dreaded disease.

I could add some horror stories about fundamentalist/evangelical ideas and attitudes from his side of the family, but you are already aware of how they tend to behave.

Evilgelicals is the correct term for this disgusting group of hatemongers and phonies.

I want to use this opportunity to appreciate Dr Ekpen for the good work that his doing around the world, many of you must have ahead of him and what his doing. The reason why I'm appreciating him on this site is because maybe someone out there is facing the same challenge and he/she don't know what to do next to fix the issue, Dr Ekpen is a great spell caster and friendly also, if you have problem in your relationship you can contact him right way and he will be clad to help you out. Contact him now via email at ekpentemple@gmail.com or on whatsaap +2347050270218.

I want to share my testimony on how i get cure of my HERPES GENITAL with the help of Doctor idahosa, i have being suffering for this disease for a very long time now.i have try several means to get rid of of the (HERPES) disease for the last five years and had constant pain, especially in my knees. During the first year,I had faith in God that i would be healed someday.This disease started circulate all over my body and i have been taking treatment from my doctor, few weeks ago i came on search on the internet if i could get any information concerning the prevention of this disease, on my search i saw a testimony of someone who has been healed from (Hepatitis B and Cancer) by this Man Dr idahosa and she also gave the email address of this man and advise we should contact him for any sickness that he would be of help, so i wrote to Dr idahosa telling him about my (HERPES Virus) he told me not to worry that i was going to be cured!! hmm i never believed it,, well after all the procedures and remedy given to me by this man few weeks later i started experiencing changes all over me as the Doctor assured me that i am cured,after some time i went to my doctor to confirmed if i have be finally healed behold it was TRUE, So friends my advise is if you have such sickness or any other at all you can email Dr idahosa on { dridahosasolutioncenter@gmail.com } sir i am indeed grateful for the help i will forever recommend you to my friends and to share this to every one that have any of this sickness you can call his whatssAp via +2348134261542