Comparing Covid-19 to the Spanish Flu is Pointless


There are plenty of graphs and charts circulating that convey the idea that this novel coronavirus is a trifle compared to the savage viral contagions of the 20th century. That idea is right in some ways but very, very wrong in others.

The world in 1918 was a much different place than the world of 2020. Civilization, the human population, has metastasized over the past century. It has undergone massively transformative change. changes that have left us less resilient, more vulnerable and, in many ways, indefensible.


I wrote my book “The World Is Flat” about growing global interconnectedness in 2004. The world has gotten so much flatter and interconnected since. Heck, when I started writing that book, Facebook was just being launched; Twitter was only a sound; the cloud was still in the sky; 4G was a parking place; LinkedIn was a prison; for most people, applications were what you sent to colleges, Skype was a typo and Big Data was a rap star. And the iPhone was still Steve Jobs’s secret pet project.

All of those connectivity tools, not to mention global trade and tourism, exploded after 2004 and really wired the world. Which is why our planet today is not just interconnected, it’s interdependent — and in many ways even fused.

This has driven a lot of economic growth. But it’s also meant that when things go bad in one place, that trouble can be transmitted farther, faster, deeper and cheaper than ever. So, a virus-laden bat bites another mammal in China, that mammal is sold in a Wuhan wildlife market, it infects a Chinese diner with a new coronavirus and in a few weeks all my public schools are closed and I’m edging six feet away from everyone in Bethesda.

Here’s a simple way to explain the exponential threat we face — in a way an oft-bankrupt real estate developer like Donald Trump might understand. It was also offered by [Sun Microsystems'] Bill Joy: “The virus is like a loan shark who charges 25 percent a day interest. We borrowed $1 (the first coronavirus to appear here). We then fiddled for 40 days. Now we owe $7,500. If we wait three more weeks to pay, we’ll owe almost $1 million.”

That’s why working every single day to slow the rate of infection and testing everyone possible is everything. Lose that battle, lose the war.

Friedman writes that, once the pandemic is over, American society will be delineated as BC - Before Corona and AC - After Corona.


In an essay in The Boston Globe last week, [author and University of Maryland prof, Michelle] Gelfand recalled that in a paper she and her colleagues published in Science several years ago, they classified countries in terms of how much they prioritized rules over freedom as either “tight” or “loose,” writing: “Tight societies, like China, Singapore and Austria have many rules and punishments governing social behavior. Citizens in those places are used to a high degree of monitoring aimed at reinforcing good behavior. Loose cultures, in countries such as the United States, Italy and Brazil, have weaker rules and are much more permissive.”

These differences in tightness and looseness, she argued, were not random: “Countries with the strongest laws and strictest punishments are those with histories of famine, warfare, natural disasters, and, yes, pathogen outbreaks. These disaster-prone nations have learned the hard way over centuries: Tight rules and order save lives. Meanwhile, cultures that have faced few threats — such as the United States — have the luxury of remaining loose.”

It’s been pretty obvious, said Gelfand, that “famously ‘tight’ societies like Singapore and Hong Kong … have demonstrated the most effective response to Covid-19.”

Only generosity will save us. There are millions of business owners and employers out there who are invested in long-term assets that they were assuming would go up in value — a stock, a company, a home, a restaurant, a store — with borrowed money. That’s money that they can’t now repay.

Therefore, we not only need the Fed to backstop their banks to prevent a total meltdown, we not only need the banks to restructure their debts, we need to get fresh cash into the pockets of all their workers so they can eat after their last paycheck is spent. It is encouraging to see the administration and Congress moving rapidly to do just that.
The more we simultaneously tighten our culture and loosen our purses, the stronger and kinder society we’ll be A.C. — After Corona. 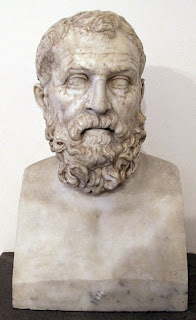 The next epidemic may well be a contagion of debt and insolvency. We'll need to sort that out without the ability to throw resources at it, resources we no longer have as the world did in the 2007-2008 Great Recession. Other, more creative and vastly more constructive answers will be needed.  This brings to mind the lessons of ancient Athens and the statesman and great reformer, Solon, from the 6th century BC.

America and, for that matter, many countries in the developed world may need new policies vaguely akin to Solon's Seisachtheia.

Athenian society had become debt-bound. The economy was collapsing under its own weight. There were too many debtors who could not pay, many of them stripped of their lands and imprisoned or, together with their families put into slavery. There were too many creditors, merchants, who could not recover what was owed them and also lost the customers who had built their businesses that now languished in prisons or slavery. The city state was falling into decline.

Solon's reform of these injustices was later known and celebrated among Athenians as the Seisachtheia (shaking off of burdens).  As with all his reforms, there is considerable scholarly debate about its real significance. Many scholars are content to accept the account given by the ancient sources, interpreting it as a cancellation of debts, while others interpret it as the abolition of a type of feudal relationship, and some prefer to explore new possibilities for interpretation. The reforms included:

annulment of all contracts symbolised by the horoi.

prohibition on a debtor's person being used as security for a loan, i.e., debt slavery.

release of all Athenians who had been enslaved.

The removal of the horoi clearly provided immediate economic relief for the most oppressed group in Attica, and it also brought an immediate end to the enslavement of Athenians by their countrymen. Some Athenians had already been sold into slavery abroad and some had fled abroad to escape enslavement – Solon proudly records in verse the return of this diaspora.

I don't suggest that 21st century America could have a "shaking off of burdens" but, like ancient Athens it has a plague of debt that requires some remedy. The annual federal deficit when Trump came to power was $585 billion, 3.2% of GDP. By 2019, Trump had it up to $984 billion or 4.7% of GDP. This year it will easily break a trillion dollars. Now Trump is promising another $.85 trillion (atop the existing trillion dollar deficit) in stimulus spending. The American commercial sector has been fueled by debt and easy money. The era of "everyday low taxes" has exacerbated this dangerous imbalance. We've been warned for years that consumer indebtedness had reached perilous levels. We have created a weakness that increases our vulnerability to even a viral epidemic.

In some 30 year old research I am rereading I find a general merchant in 1860's Ontario who took over a few farms in exchange for years overdue accounts. The people were not put out but remained on the farms, continued making a living farming, continued buying from the storekeeper and paid rent.

The merchant got his money, the farm family kept a place to live and means of livelihood .

How is that different from peonage?