Is This a Re-Run of the High Middle Ages? 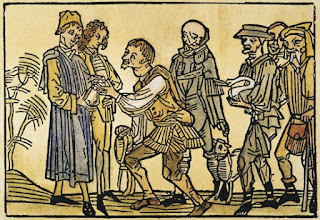 The Black Death came at the end of a long period of economic contraction that had begun way back in toward the end of the 1200s. Before that, there had been this long period of economic efflorescence in high medieval Europe of “the commercial revolution,” where long-distance trade spread rapidly, lots more money was in circulation, the economy grew. But it was built on demographic growth; some populations doubled or even tripled throughout a lot of Europe.

Many countries today, including China and India, have seen their populations triple since the end of WWII. Over that same interval, the US population has more than doubled.


And that meant that by the end of the 13th century (1200s) practically all of the arable land was under cultivation. Even a lot of marginal, mucky, hilly, swampy land was in use. But the effect of having all of these people was that wages were extremely low. There were a lot of people living on the edge of subsistence without land of their own. These were the material conditions that underpinned the peak of the serfdom system, a labor arrangement in which people owed unpaid service to the lord in return for the use of his land.

There’s a climate element, too. Part of the reason for this long economic efflorescence was that it was a period of really good, warm, stable weather. It’s less important for farmers that the weather be good than that it be predictable, because what you need to know is when to sow your crops and when to harvest them. But over the late [1200s] and into the [1300s], the weather gets much worse. It’s much less predictable — it’s wetter, colder. And that reaches a particularly bad point in what’s known as the “Great Famine,” which spikes between about 1315 and 1322. A lot of people died: Hundreds of thousands or millions of people starved to death across Western Europe. So that’s a sign that there is something systemically wrong. And that continued up through the Black Death.

There were also a whole bunch of bankruptcies of very large businesses — unprecedentedly large businesses that in the historiography are called “the Super-Companies” — that were invested all over Europe. They went bust in the middle of the 1340s, before the Black Death. They went under for a lot of reasons, but one of them was because of how overexposed they were and how teetering the economy was.

So you have tight money. You have high population, low wages, high land costs … that’s a recipe for a really bad series of outcomes.

What goes up inevitably comes down. That's true for dominant countries that rise to form empires m- Dutch, French, Spanish, British - or quasi-empires such as the United States.


The end of the Roman Empire did not make life worse for everybody, and I think that’s an important point. Life does not have to get worse because of the end of a large-scale political entity. There’s some desperate inequality in the Roman Empire. A lot of groups of people are systemically treated terribly in the Roman system. For most people, there is no baseline assumption that their life has any real value. So the standard of living probably rose for a lot of people in the post-Roman world, population health was probably better, and diets were probably better in large swaths of the world.

That said, life often can get worse because of the end of a political system. There are things that large-scale states do that make life better or are quite useful in a lot of ways. There’s some evidence that, after Rome, people lived in a more violent world. The simple fact was that people — and there were a lot fewer people in general — lived in much more local worlds. Their worlds were much less urbanized and less connected over long distances. I wrote my doctoral dissertation on how there was a lot less long-distance communication in the post-Roman world.

For our grandkids, I worry a lot about the climate, about a time when you just can’t really go outside in the summer, when you can’t grow certain crops because it’s too hot. I think we could be in a similar situation as post-Roman Europe, in which — if the climate stuff keeps going the way it’s going — we have a more violent world and a more disordered world. It’s not necessarily worse, but we could definitely be telling them about a much, much different world.

To meet the challenges of the 21st century we will need new, highly capable leadership. The era of the feeble technocrat, the administrator, the petit fonctionnaire, must end.


But as we’re looking to solve our current problems, we need people who have the right skill sets. We need people who know how to pull the levers of the political system to direct state resources toward the massive glaring problems that we are facing. We need people who can see a shortage of protective equipment in hospitals and find ways to ensure we are producing and distributing that equipment. If we need to test people for the coronavirus, we need people in positions of power who can guarantee that we are producing, distributing, and utilizing coronavirus test kits. That’s what the situation demands.

And at moments like this, we have the opportunity to evaluate what is and isn’t working, and you have the opportunity to make change. Yeah, this crisis is ongoing, but when the dust eventually settles, we will be able to look at the wide and broad strokes and see things that desperately need changing. And hopefully we can use this as an opportunity to build more resilient systems as we move forward.

This won’t be the last shock. We’ve been very lucky that we haven’t had one for a long time. But we’ll have another one.

Several days ago you asked if Covid-19 was going to be the big hit, or words something to that. No, C-19 is just a warning shot. It won't kill nearly enough to force governments to reevaluate and make necessary changes. We can already hear the Neo-libs clamoring about funding their rebuild.

Wyman gets it. He understands the weaknesses we have constructed and/or nurtured.

There will be another shot and another after that. We are set up for a perfect storm of disasters, plagues, fires, crop failures, dead oceans, all hitting us at once. Imagine C-19 hanging around until fire season. What gets my dander up is that many of us have been warning to deaf ears for a long time.


If we fail, Toby; if we collapse, it won't be for want of early and persistent warning. By ignoring that chorus of warnings, whatever occurs happens by our choice. Doing nothing is an act. Failing to decide is a decision. It's why we use the term "act" of omission.