Meanwhile, Since Government is Hell Bent on Clearing the Way for a Foreign-Owned LNG Plant 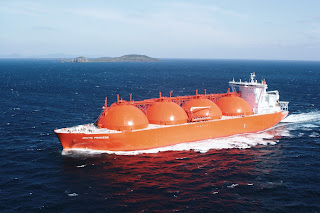 To hear creeps like Jason Kenney and John Horgan tell it, Canada is being undermined by environmentalists and First Nations protesters working hard to sabotage our fossil energy economy.

About British Columbia's natural gas scam. Something doesn't add up. The first clue was when Chevron, which holds a half interest in the Kitimat LNG operation took a $2 billion (USD) write down on the asset which it seemingly cannot find a buyer to take off its hands.

We know that oil markets are collapsing due to a glut of even low-carbon oil. However oilprice.com reports that, chaotic as world oil prices may be, methane markets could be in even bigger trouble.


Excess production, depressed demand, and weak prices: this sums up the natural gas market right now even better than it sums up the oil market. Unfortunately, with the China coronavirus outbreak on track to become global, things for gas may well get worse before they get better. And while oil is suffering, at least it’s got a cartel to attempt to balance things out. Gas doesn’t, putting it at an even greater disadvantage.

The global oversupply of natural gas is nothing new. A combination of new LNG and pipeline capacity and milder winters in some parts of the world combined to tip the market into oversupply that persists to date. However, demand has been worsening thanks to the outbreak that some are already calling a pandemic in the making. As a result, gas prices in Europe, Asia and the United States are falling.

In Europe, the benchmark has lost 27 percent since the start of the year after losing close to 50 percent last year. In the United States, Henry Hub futures prices are currently below $2 per million British thermal units until July, when the futures price tops $2 per mmBtu. According to Richard Soultanian, president of energy consultancy NUS Consulting Group, prices in the U.S. could weaken further, to $1.50-$1.60 for near-month contracts, before they begin improving later in the year.

What could possibly help gas prices? Europe is full of gas to the gills. So is Asia. The Energy Information Administration has forecast that U.S. gas inventories will hit a record later this year, at 1.935 trillion cu ft, which would be 12 percent above the five-year average. Production shows no signs of slowing mostly because a lot of the gas produced in the United States is associated gas from oil wells in the shale patch. There seems to be no way up for prices, and this means more pain for some gas producers, especially pure-play upstream companies in the U.S.

Two dollars per million BTU. BC's break even price for LNG delivered to Asia is nine dollars per.  I know the BC government, the former Liberal government, put the province's neck in the noose years ago when it boasted of a trillion dollar bounty but, surely, the game is up now.

I have suspected that for some time oil and gas prices have been determined, not by demand but by cartels and manipulation.
We have little competition within the oil and gas supply business as we have in many other industries that are monopolised.
The public can only blame itself as it aligns itself with brand allegiance be it at the gas pump or the voting booth.
When being on the winning side becomes most important no one wins.

And for this we have to subsidize a ponzi scheme by flooding a fine agricultural valley to make way for the Site C dam.

To hear creeps like Jason Kenney and John Horgan tell it
NO..
Kenny and Horgan are trying to provide jobs.
Jobs make reliable voters regardless of consequence.
Voters are not so educated or altruistic.

It was the 'mother of all cartels,' OPEC that gave birth to the Blue Eye Sheiks, TB.

Good Grief! I may not be the brightest bulb in the chandelier but I've been forecasting this scenario for the past five years.
What's the problem with those supposed 'leaders' and their coterie of wizards?
Can someone pass this excellent article on to Trudeau, Horgan and Kenny before we find ourselves in serious trouble!

The current corona crisis could change everything.

We can't even make our medicines w/o 80% Chinese ingredients.

If the corona crisis has a 'silver lining' and it's time for Globalization to Rest in Peace, then the LNG/TMX boondoggles will crash.

Can we add Site C to that crash? Please!