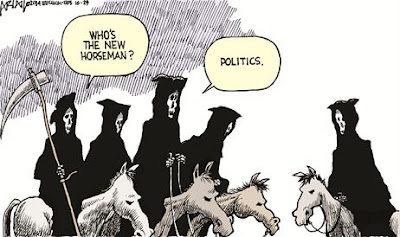 "Here's to a bad plague and a bloody season." I heard that line from an old friend, a former naval officer. Apparently it originated from subalterns, junior officers, in the Royal Navy during the 18th or 19th century, the age of sail. Eager for promotion they prayed for something to thin the ranks above them, something like a plague or a bloody war.

Andrew Nikiforuk writes that this contagion, like those past, will usher in real change.


In 2016 the Commission on Creating a Global Health Risk Framework for the Future, a U.S. panel of health experts, warned that “the conditions for infectious disease emergence and contagion are more dangerous than ever” due to overpopulation, urbanization, industrial livestock crowds and mobility.

The panel estimated that there was a 20 per cent chance that four pandemics could unsettle the globe over the next century.

The late Joshua Lederberg, a Nobel Prize winning biologist, warned more than a decade ago that the world had entered a disquieting era of plague making.

“We have crowded together a hotbed of opportunity for infectious agents to spread over a significant part of the population. Affluent and mobile people are ready and willing and able to carry affliction all over the world within 24 hours’ notice. This condensation, stratification and mobility is unique, defining us as a very different species from what we were 100 years ago,” he wrote.

The only surprise in the Covid-19 pandemic is that governments were so abysmally unprepared for it. We have been warned by the science types that this was an integral part of the Anthropocene. It was going to happen - a lot - they said.  Governments seduced by the quest for perpetual exponential growth have no time for such warnings because they demand restraint on production, consumption and travel.


As COVID-19 provokes the usual spate of plague behaviours (fear, dread, generosity and compassion) it is worth remembering that pandemics remain critical and immutable social forces that shape our lives. They paralyze and disrupt. They reveal and renew.

Nikiforuk lists 10 characteristics that the global elite have ignored to our peril. He writes that there's nothing random about pandemics.

...vaccines and drugs rarely arrive on the scene until the pandemic has waned. In fact material changes in human behaviour, housing, nutrition and hygiene have always had the most impact on slowing or stopping plagues.

...The Silk Road brought rats and fleas to 13th-century Europe resulting in a demographic collapse in which one in four people died. The slave trade bombarded two continents with epidemics. Waves of cholera epidemics followed European trade routes from the Ganges Delta to the slums of major cities. Global steamship traffic dutifully carried influenza around the world and played a key role in spreading the deadly Spanish flu pandemic.

...President Woodrow Wilson was so focused on the First World War that he ignored repeated warnings about influenza and its impact on Atlantic troop movements to the Western Front. At the end of the war Canadian and U.S. authorities knowingly put sick troops on cramped ships with poor ventilation. As a result the flu killed 675,000 Americans while the trench warfare claimed but 53,000 U.S. soldiers.

President Donald Trump, who initially accused his political rivals of perpetrating a “hoax” when they warned his administration wasn’t doing enough about COVID-19, failed to prepare the United States with adequate testing and containment. Then, saying “I take no responsibility at all,” he falsely blamed the Obama administration for inadequate testing kits.

...COVID-19, for example, could provoke challenges to the unsustainable complexity of technological life as well as the deadly biological traffic in all living organisms on a planet now crowded by eight billion people. We might, after the storm has passed, question the vulnerability of monocultures and the globalization of everything.

Justin Trudeau and his fellow leaders didn't wish this upon us. They didn't plan this. They didn't plan for it either. They ignored the warnings that a pandemic was coming and there would be a succession of them in the decades to come. Theirs are sins of omission and we need an accounting for that.

We don't know how lethal Covid-19 will turn out to be. We don't know how the virus will mutate before the second and possibly a third wave hit. In the Spanish flu pandemic of 1918-1919, it was the mutated virus of the second wave that was, by far, the most devastating.

We live in an age of science. It is time our governments heeded the warnings of science and stopped their slavish pursuit of corporatism and the global economy.
Posted by The Mound of Sound at 9:22 AM

"The truth about coronavirus is scary. The global war on truth is even scarier."

It seems that a reckoning has come our way, Mound. Our smug hubristic belief that all things can be addressed through science and technology is now shown for the delusional thinking it has always been.

I read that NatOb piece, Toby. Difficult times invite, sometimes even demand authoritarian responses. Mobilization is inherently authoritarian. So too is rationing. We have to recognize it and push back against it when the moment of crisis passes.

I don't fault science and tech, Lorne. After all it was the science types that warned the global economy left us vulnerable to many potentially catastrophic risks. The hubris has arisen out of the marriage of commercial and political interests. The maniacal pursuit of profit and growth has undermined our security and wellbeing - just as the scientific community, for nearly 20 years, has warned would happen.

There is much more money to be made fighting with weapons than antidotes.
At the end of this shit shown which is denying me access to my favourite gym someone is going to make $billions.
We will likely lose more civil liberties.