It's a bit worrisome when our leaders come out with misleading narratives on something as serious as a pandemic. In the case of Donald Trump that's to be expected. Others you might expect to know better, to be more factually grounded.

The message that I'm getting from world leaders is that Covid-19 is a global contagion but it's going to come and then, in some more or less orderly and predictable fashion, go and we'll all get back on with our lives.  Today's recession warning from the Royal Bank assumes the current pandemic "will run its course by the end of the first half of the year."

The US Centers for Disease Control, CDC, looks at the deadly Spanish Flu pandemic of 1918-19.  That  virus hit in three waves, the second by far the most deadly.

There are many other sites but they all confirm that pandemics aren't over quickly and they come in waves, the subsequent waves usually far more lethal because the virus itself mutates.  In 1918, the first wave hit in the spring but it was the second wave, in the fall of 1918, that was by far the more devastating. The third wave that hit in the winter 1918/spring 1919 was much smaller in deaths and infections. 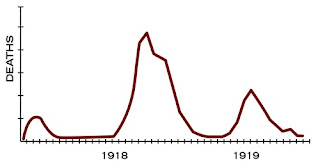 The European Centre for Disease Prevention and Control sums it up.


The virus has to be novel enough to prevail over the seasonal A viruses, and because of its novelty there can be little specific immunity among humans, except for older people who may have met a similar virus in the past. This new virus can then spread rapidly from human to human all over the world. Because of the lack of human immunity the virus causes a variable amount of severe disease and deaths: this is an influenza pandemic. As immunity increases among humans, and the pandemic virus changes, the pandemic strain becomes part of (and may dominate) the mix of seasonal influenza A viruses, perhaps changing some of the characteristics of seasonal influenza.

It remains to be seen whether Covid-19 will behave as other 'novel' viruses have in the past. If so, it's a 12 to 18-month contagion that will see either two or three waves of infection.

It's beginning to look like C-19 is more dangerous than at first reported.

We might not know until we discover what it's morphed into for the second wave. BC wants people returning from abroad, including the US, to self-quarantine for 14 days. However that doesn't mean we'll be stopping any Americans from crossing into Canada. And, of course,the 14-day rule is voluntary.