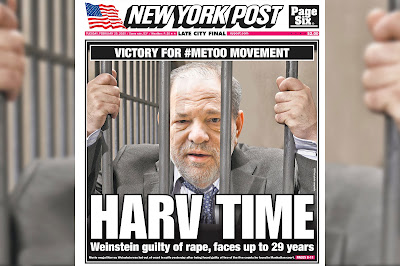 The Daily Beast reports that disgraced movie mogul, Harvey Weinstein, has been handed an all-expenses paid, 23 year stay in the Greybar Hotel for rape and sexual assault.  His counsel had argued he should receive the minimum, 5-year sentence but - no such luck.

Weinstein, 67, was convicted last month of sexually assaulting former Project Runway production assistant Miriam Haleyi and raping former actress Jessica Mann. The Oscar-winner—who was handcuffed to his wheelchair as he was removed from the courtroom—faced a minimum of five years and up to 29 years in prison.

Handcuffed to his wheelchair?

Weinstein did himself no favours when he rambled in court about how it really wasn't that bad for his victims and, after all, he was "a builder" and a gazillion little people depended on him for their jobs, including a lot of people he didn't even get around to - in a Biblical sense - because he was just too damned busy creating their jobs.


“I am a builder. I know how to build and I know how to generate and pass my success forward,” he said, claiming that his victims would say he’s “generous in that part of the relationship.”

“I am just feeling for the thousands of men and women who are losing due process,” he said. “I am worried for this country.”

“People are losing their jobs over the fact that they testified,” he continued. “This is the United States of America. This is wrong. I had no great powers in this industry. At the height of it’s power, Miramax was a small business.”

So, it's Uncle Harvey, the 'generous rapist.'

Next up, Harvey flies to LA for round two of the Weinstein Rape-a-Thon.

When Harvey realizes he doomed, even though he isn't guilty IMHO and no longer has any reason to hold back from revenge, look for him to unleash all the Hollywood dirt he has been collecting in his defence. Alot of folks in Hollywood are going to get wrecked.

Well that should give us something to watch while we're all pandemic shut-ins, Gyor.

It was no secret in the movie biz that Harvey Weinstein mixed business with sexual assault and rape. A New York jury heard weeks of evidence and concluded the same thing. The judge who heard the same evidence gave Weinstein a near-maximum sentence despite the fact that Weinstein is rich, white, elderly and a "first offender." So on what basis does anyone who didn't hear the evidence form an "honest opinion" that he's not guilty?!

.. One just contemplates the fundamental similarities and social circles
of Epstein and Weinstein, and the close willing enablers.. not all paid, either !

Now take those two and consider the vaunted so called society & industry leaders..
.. as well as the Law & Order & legal systems doing extended synchronized belly flops
as did the holy trinity of Mainstream Media, Organized Religion and Political Parties
..all purportedly didn't see a thing.. yet were involved..
or they dismiss the crimes, condone the crimes.. or deny deny deny

Think about the Who's Who just regarding those rwo felons !
Does anyone believe its straight to jail ?
Hell, one of them is already dead & he aint goin to prison
Surely its Presidential Pardon time.. and just as surely
its Quid Pro Quo all over the place. Whomever can and needs coverup
alread has their PR emergency crew deflection shields
up on full stun/deny/lie mode.. be fall guy & scapegoats plenty
and some legal horsetrading I would imagine

I don't know what the current pardon tariff is, Sal. I suppose if he picked up a couple of units in Trump Tower and had friends make a few six-figure contributions to Trump's campaign that should about do it.