The Ghosts of Auschwitz 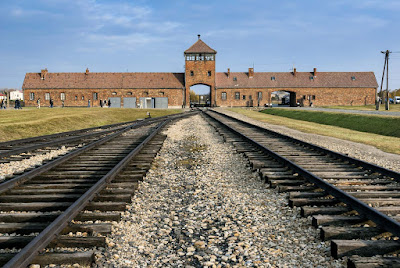 In January a group of politicians and dignitaries gathered to commemorate the 75th anniversary of the Auschwitz death camp. They joined 200 of the last survivors of the Nazi hellhole. Henry Giroux writes that several of the survivors openly asked if we're not witnessing a return to that darkness.

Calls to never let such crimes happen again were mixed with impassioned indignation and a “warning against the complicity, apathy and demagoguery that paved the way to the mass slaughter of about 11 million people.” Several survivors spoke not only to the terrifying criminal nightmare and systemic ethnic cleansing undertaken at Auschwitz, but also to the conditions that made it possible, warning that the lessons there have not been learned by existing generations.

A number of the survivors expressed alarm at our current moment in history when authoritarianism is on the rise once again. They argued that indifference and the failure to hold power accountable provide the moral abyss and political foundation that makes mass murder possible. Many, such as 91-year-old Elza Baker, warned that, “There are signs to look out for, if you don’t watch out one day you wake up and it’s too late.” The toxic shadow of Auschwitz and the collective repulsion against bigotry, discrimination, racism and racial purity appear to have been forgotten as fascist forces long kept at bay in the margins of society have moved to the center of power. For instance, in Poland almost a 100 municipalities have adopted resolutions declaring themselves as “LGBT-Free Zones.” This anti-LGBT rhetoric echoes a sordid genocidal moment in Poland’s history. It makes the familiar claim of passing homophobic resolutions which exclude those considered disposable from public space in the name of defending Christian values and “children, youth, families and Polish schools from sexual depravity and indoctrination.”

Under demagogues such as Donald Trump in the U.S., Jair Bolsonaro in Brazil, Recep Erdoğan in Turkey, Narendra Modi in India and Viktor Orbán in Hungary, a moral abyss has emerged in which state violence, widespread repression and a surge of lawlessness against those considered disposable have become the hallmark of an updated fascist politics.

...
Repressive apparatuses associated with fascist politics are further normalized through a culture of fear and a language of demonization, depravity and racism long associated with fascist ideas and culture. For example, in the United States, the Trump administration appeals to the racist sentiments of neo-Nazis, ultra-nationalists, white Christian fundamentalists and white supremacists. This is evident not only in his relentless racist taunts, policies and discourse, but also in his various appointments of white supremacists such as Stephen Miller, an avowed white nationalist who serves as Trump’s senior aide and is the architect of Trump’s immigration policy. As Rebecca Gordon observes, Trump’s racism and embrace of white supremacy has emboldened individuals, groups and authoritarian politicians such as Jair Bolsonaro in Brazil, who share Trump’s views.

We are witnessing the rise of evil men elevated to high office. So far it seems that our policy has been to ignore their vile ministrations in the blind hope they're a passing contagion that will run its course and go away. History has shown that's a terrible bet.
Posted by The Mound of Sound at 10:15 AM

The trend is worrisome, Mound. Mix authoritarianism with corporatism and fundamentalist religion and the self righteous will be knocking down our doors. For far too long we have been kidding ourselves with it can't happen here. Well, it can.

I agree, Toby. We're not taking this growing threat seriously. Our leaders certainly aren't and most are taking their cues from them.

I've read enough about how German society changed incrementally in the run up to WWII until even most otherwise decent people got swept up in fascism that I'm convinced we can't take this lightly.