Government of the Rich, By the Rich, For the Rich - The Republicans' Plutocratic Agenda 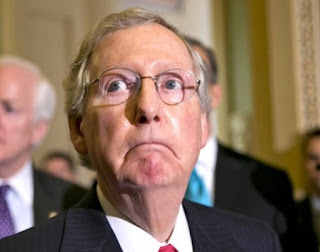 Give Mitch McConnell his due. To him, hypocrisy in defence of plutocracy is no vice. How else to explain how Senate Republicans never met a tax cut for the rich they couldn't approve but have no tolerance for relief for ordinary Americans in the throes of a pandemic. Paul Krugman says it better:

They’re willing to cover for Trump’s unprecedented corruption; they’re apparently unbothered by his fondness for foreign dictators. But spending money to help Americans in distress? That’s where they draw the line.

This was obvious even before the coronavirus struck. Remember how Trump promised to spend trillions on infrastructure, then defaulted on that promise? “Infrastructure week” eventually became a running joke. But while Trump’s infrastructure proposals never made any sense, in early 2019 it seemed as if he might actually have a deal with Democrats for a serious spending plan.

But the deal went nowhere thanks to opposition from Senate Republicans, including Mitch McConnell, the majority leader.

McConnell and company are also the main reason we don’t have a deal to help Americans survive the economic effects of the pandemic.

...Trump’s chances of re-election and McConnell’s chances of holding on to the Senate would almost surely be better if there actually had been an infrastructure bill last year and a relief bill this past summer. Why weren’t Republicans willing to make those deals?

Whatever they may say, they weren’t concerned about the cost. Republicans didn’t worry about budget deficits when they rammed through a $2 trillion tax cut for corporations and the wealthy. They only pose as deficit hawks when trying to block spending that might help ordinary Americans.

No, what this is really about is the modern G.O.P.’s plutocratic agenda. McConnell and, as far as I can tell, every member of his caucus are completely committed to cutting taxes on the rich and aid to the poor and middle class. Other than March’s CARES Act, which Republicans passed only because they were panicking over a plunging stock market, it’s hard to think of any major G.O.P.-approved fiscal legislation in the past two decades that didn’t redistribute income upward.

You might think that Republicans would set the plutocratic imperative aside when the case for more government spending is compelling, whether it’s to repair our crumbling infrastructure or to provide relief during a pandemic. But all indications are that they believe — probably rightly — that successful government programs make the public more receptive to proposals for additional programs.

...So while Trump bears much of the responsibility for the misery facing millions of Americans, McConnell probably bears an equal share. Will they pay the political price? We’ll find out in three weeks.

Mitch McConnell is a sorry excuse for a human being, Mound. He has proved time and again the goal posts are quite mobile and he will move them at his pleasure.

On the other hand, I recently read that the Dems are looking at 600,000 Americans living in Canada who are eligible to vote and want to tap into those potential votes. Have to admit that I wonder where they all might live -- and I suspect a goodly number will be in Alberta so good luck with a Dem vote there. There is potentially a significant number at our various Universities across our nation - I know that Simon Fraser U has a number of them and could be helpful.

My parents taught us early in life to pay attention to what was happening in the US because within 10 years it would be happening in Canada - and that included politics! I shudder to think of a Trump style coming to a government near me, but then I look at the current Alberta situation and realize it may be closer than I wish.

Hope you enjoyed your Thanksgiving dinner - our daughter-in-law cooked ours and it was delicious.

Hi, Lulymay. Sounds like it was fine turkey dinners all round.

If Trump wins our population of Americans living in Canada might just double. When I practiced law in Vancouver I met three, no four, "dual citizenship" CanAmericans. They were of my vintage, guys who decided Vancouver was a lot better than that other destination, Vietnam. Fine lawyers, every one of them. One of them is gone but I know the other three will be voting for Joe Biden.