"Rage" The Shortest and Best Chapter 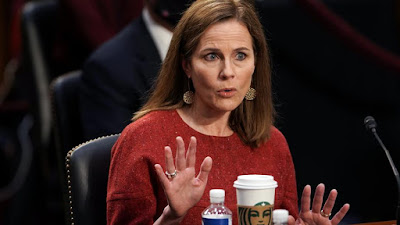 Rage, Bob Woodward's latest book on Donald Trump and his administration is a pretty good read. The least interesting bits are his conversations with the hopefully outgoing president. There's a lot to be gleaned, however, in Woodward's conversations with ex-defense secretary, James Mattis; ex-secretary of state, Rex Tillerson; ex-national security advisor, Dan Coats; and other denizens of the Trump White House.

The best chapter, Chapter 29, is the briefest and perhaps the best. It concerns the chairman of the Senate judiciary committee, Lindsey Graham, speaking candidly of how the process for confirming judicial appointments got so screwed up.  Graham faults Obama and Harry Reid for scrapping the filibuster process.

"I didn't know we had so many fucking judges," Graham said. "I think every town's got a judge. Some are a little wacky. Most of them are really good. But a few outliers. The problem is when you only need a simple majority, you don't need to go outside your own party."

...A filibuster effectively allowed one senator to block the appointment of a judge. Senate rules required 60 votes to overcome a filibuster, meaning in effect each nominee needed the support of at least 60 senators.

But in 2013, under Obama, Senate Majority Leader Harry Reid, infuriated by Republicans' use of the filibuster, pushed the elimination through.

"I don't think I've ever seen John McCain more upset," Grahan recalled. "Because that's the beginning of the end."

The result was making the judiciary more ideological, Graham realized. The rule change had removed the need to strive for compromise. "If you've got to reach across the aisle and pick up 10 votes, you're going to have a different judge than if you don't."

...Now with Trump's appointments "there's some wacky ones, but there's some that didn't make it. I said no. No, we're not going there.

"But we have weeded out some really wackos. It's only going to get worse over time, though. The judiciary is going to get far more ideological. It changes the Senate. It's just a matter of time until the Senate becomes the House" - more ideological, more partisan and focused on the short term rather than able to take a long view.

The filibuster on legislation would be next to go Graham worried. "If Trump wins re-election and we take back the House and we've got a small majority in the Senate, they'll be so much pressure on all of us to change the rules."

...In the meantime, he said, "the judiciary's going to fundamentally change in our lifetime." The nominees will have to be approved by outspoken ideologues in the party "because you don't need any support from the other side."

Graham spoke to Chief Justice John Roberts frequently. "John Roberts is very much worried about this drift. He's an institutionalist at heart. He's joined several 5 to 4 decisions because he doesn't want the Court, I think, labeled as a political party."

"Graham spoke to Chief Justice John Roberts frequently." I see a problem right there. Why is the chief justice meeting regularly with a Republican senator, let alone the chair of the Senate Judiciary Committee? Whatever happened to the appearance of impartiality?

Also, I wonder if Graham remembers why the Democrats blew up the filibuster in 2013? Could it have had anything to do with Republicans blocking all of Obama's judicial appointments? This left hundreds of appointments unfilled. Once Trump was in office, McConnell then used the vacancies to pack courts at all levels with "real wackos," including the one now being considered to replace RBG. We'll soon see if Graham manages to weed her out, or if he jumps indignantly to her defence, like he did with alleged attempted rapist Boof "I like beer" O'Kavanaugh.

US politics is based upon winner take all with total disregard for the losers.
They have also exported, to some degree, their unsuccessful version of democracy.
Americans see themselves as a beacon of hope to the less fortunate or should I say poor?
They are no such thing; they are a beacon of opportunity, for better or worse.

I can't imagine Graham will do anything but drive ACB's confirmation through. Something got to Graham after McCain's death. My guess is that he has a few dozen skeletons that he wants to keep in the closet. Once McCain was gone someone pounced on Graham.

As for Roberts speaking with Graham, I recall when Bev McLachlin chatted with Harper about a proposed judicial appointment.

What compounds that, TB, is that the senate is itself a stacked deck with each flyover state getting the same number of senators as California. McConnell then uses that undemocratic advantage to rig the Supreme Court in the Red States' favour.

A quote from Rolling Stone: https://www.rollingstone.com/politics/politics-features/lindsey-graham-senate-trump-928948/

"“People try to analyze Lindsey through the prism of the manifest inconsistencies that exist between things that he used to believe and what he’s doing now,” Schmidt says. “The way to understand him is to look at what’s consistent. And essentially what he is in American politics is what, in the aquatic world, would be a pilot fish: a smaller fish that hovers about a larger predator, like a shark, living off of its detritus. That’s Lindsey. And when he swam around the McCain shark, broadly viewed as a virtuous and good shark, Lindsey took on the patina of virtue. But wherever the apex shark is, you find the Lindsey fish hovering about, and Trump’s the newest shark in the sea. Lindsey has a real draw to power — but he’s found it unattainable on his own merits.”"

From Gingrich, to McCain, to Trump.

I think we've all known "Lindseys" Troy. I hired a young lawyer who went out of his way to portray himself as virtuous and progressive. A year after he moved on he was circulating in far right circles. A chameleon.

Well, on the filibuster, IIRC the Republicans were basically blocking anything and anyone. If they wanted to get anyone appointed at all, they had little choice. If I thought the Democrats had the slightest interest in their own legislative agenda, I'd be surprised they didn't get rid of the filibuster entirely during Obama's term.