Okay, Hit Him With Your Purse 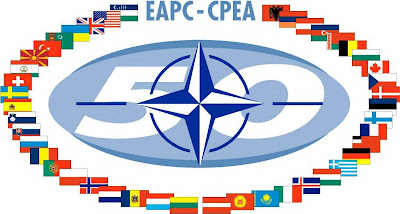 Western nations are keen to find some tangible role in unwinding the conflict between Russia and Georgia. One right-winger writing in The Times advocated giving Georgia quick admission into NATO. Another pundit, writing in The Guardian, suggests threatening to pull Russia's seat at the G8 - a tactic already endorsed by John McCain.

What to do, what to do? Here's a suggestion (and you knew I'd have one). How about we start by realizing that we've overplayed our hand? We (that is to say our Leader of the Free World, George w. Bush) decided to ram NATO's borders right up to Russia's doorstep. The logic behind that was always pretty fuzzy as was the actual committment behind it. Putting anti-missile missiles and radar systems on Russia's doorstep while pretending they were intended to defend against rogue missiles from Iran was another silly, red-meat provocation.

You have to work extremely hard to ignore the history of warfare over the past two centuries enough not to realize that certain actions tend to have quite predictable and proven results. One of these actions is to encircle and contain a major power. By turns, this sort of thing has sparked wars in Europe and elsewhere. A major player, seeing itself being hemmed in, turns paranoid and lashes out. Call it human nature if you like.

And that's exactly what Bush has been attempting - the encirclement of both Russia and China. Driving the world's paramount military alliance headed by the world's sole superpower right up to Red Square is an act of provocation and nothing but. Enlisting India to flank and contain China and threaten her oil routes to the Middle East is another blatant act of provocation. Maybe if the United States was looking at another half-century as the dominant industrial economy on the planet these options might be somewhat more viable. But America is in decline while the BRIC nations are in ascendancy.

Then there's the rationale for NATO. Did we really need Slovakia or Romania in NATO? What on earth for? Are they rushing to stand shoulder-to-shoulder with us in Afghanistan? Of course not. They get let into NATO, NATO issues an urgent plea for help from its member states, and they say "forget it." Huh?

My guess is that the eastern European states will be as reliable as NATO members as they were as members of the Warsaw Pact. Worse yet, this Georgian stunt demonstrates that they can do some rash, even dangerously stupid things that could have serious repercussions for a mutual-defence alliance like NATO.

We've overplayed our hand and the Russians have seen our bet and called.

Sometimes there are no miracle solutions. This is one of those times.

Washington accuses Russia of trying to force regime change on Georgia. Memo to Washington - that's not such a bad idea. The increasingly authoritarian Saakashvili blew it. It's not just the Russians who can never trust him again. On the trust issue, we're in the same boat. We need to send a clear message to the Georgians and to the leaders of the newly-minted NATO membership that there's no room within the alliance for adventurism (except, of course, the American type).

As for Moscow, well there's not a lot we can do. Sending forces into Georgia is so stupid even Cheney won't go there. Forget about the Security Council. Sanctions? It turns out the West needs Russia more than they need us. The last thing we need to do is to drive Russia away from the West and more closely into economic, political and military co-operation with the Chinese.

No, the outcome of the Georgian-Russian conflict won't be of our making. Nor will it resolve our provocations of Moscow or Russia's suspicion of Western intentions. Worse yet, America still has the Frat Boy while Russia sends Putin to the chess table.

If there are any lessons to be learned from this debacle, any gain to be had, maybe it's to understand the urgent need to defuse tensions between Russia and the West, even if that means backing down a notch.
Posted by The Mound of Sound at 7:10 AM

David Emerson, Helene Guergis, and Jason Kenney is still waiting for the phone call briefing them on the situation in Georgia.

Your assessment is too bleak. If the European nations are totally inadequate in dealing with a sabre rattling Russia, then we better get our act together fast. How effective are the Cold War institutions such as the OSCE if we cannot morally reprimand a belligerant Russia? How can we also let Western Europe Union (WEU) play a more important role in defending Central and Eastern Europe, if this is what Obama will demand as the US need to focus on Afghanistan in the distant future?

Maybe the US cannot overcome imperial overstretch and the collapse of global capitalism is close. But Georgia is where we as democratic loving people move make a stance, whether you are Nicolas Sarkozy, Bernard Kouchner, Michael Ignatieff, and Bob Rae. Bismarckian diplomacy is all dandy but liberals do expect better. So I am waiting for either Iggy or Rae to attack Emerson on why Canada has not done enough to condemn Russia over the weekend.

Oh I'm all for moral reprimands, the more the better. I think Putin has a file for those things right out behind his office. So, while we may take a stance (or posture)on Georgia it really doesn't matter so long as we don't take a stand. But, by all means, we should puff ourselves up, turn bright red, and yell our lungs out at the Russkies. That'll teach them, won't it?

Well, there is another aspect of moral reprimand that Canada has failed to consider. Wake up Bev Oda!!! Wake up Michael Ignatieff!!!

How about sending humanitarian relief into Georgia? If the OSCE cannot intervene militarily, then it needs to do it on a humanitarian basis. Sending emergency applies, peacekeepers to protect the work of relief agencies etc. Kouchner and Berlusconi have proposed that in Georgia today. I have yet to see a response from Emerson, Bob Rae, or even Iggy on this matter (this is Iggy's baby, remember).

If you believe that Canada is failing in Afghanistan, then we must start reasserting our role as peacekeepers or at the very least, the leader in a moral and ethical foreign policy. Sending relief supplies to Georgia is a start.