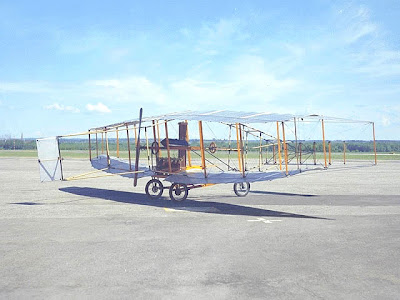 If all goes well, a handbuilt replica of Alexander Graham Bell's Silver Dart will mark the centennial of powered flight in Canada with a short hop over Baddeck Bay, Nova Scotia.

The replica Silver Dart was the brainchild of a bunch of aviation buffs from the Welland area. They're a terrific story in their own right. I've known one of them since the 60's, a friend of my father's.

These fellows, who include a retired 747 captain, are recreational flyers who own their own hangar in which they store their small fleet of vintage and homebuilt aircraft. It's been their habit every now and then to fuel up their planes and take off on trips to places like Alaska or Florida.

To build the Silver Dart replica these guys created the Aerial Experiment Association. They've got a web site that explains what they had to do to make the Silver Dart centennial flight a reality.

http://www.silverdartreplica.com/
Posted by The Mound of Sound at 11:25 PM