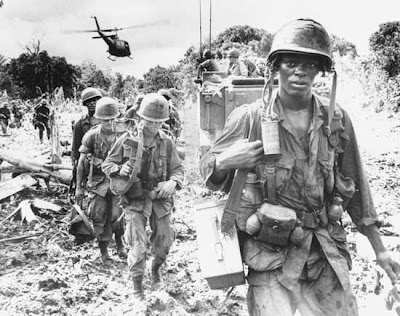 He was one of the most esteemed reporters of the Vietnam war. He was one of the main characters in the book and movie, "We Were Soldiers Once." Joe Galloway is still a war correspondent, for McClatchey Newspapers.

Galloway finds that the ongoing war in Afghanistan is beginning to resemble the war he knew three decades ago, the Vietnam war:

Even though Defense Secretary Robert Gates and the Pentagon have scaled back the Bush administration’s lip service to lofty goals such as victory and a democratically elected national government in Afghanistan as the war grows more deadly and dangerous, even that may not be enough of a row back for the Obama people.

The focus is, and ought to be, on neighboring Pakistan, and on how Washington can help steady a shaky new government there that's besieged by homegrown and imported terrorists and by an economic meltdown in a place that already had had plenty of both before the global recession made itself felt.

The new administration wants to know what the end game and the exit strategy will be in Afghanistan before it doubles down on additional forces and commits billions of dollars more in aid for nation building and rebuilding.

The previous administration was seemingly happy to declare Mission Accomplished in Afghanistan after toppling the Taliban government and then starving the necessary conflict there of manpower, machinery and money to focus on its elective war in Iraq. During the long period of neglect, both the Taliban and al Qaida went to work rebuilding in their hideaways across the border in Pakistan’s wild frontier provinces.

The Taliban insurgents now have a chokehold on as much as 70 percent of Afghanistan, and they're proving to be flexible and adaptive in their attacks on American, NATO and Afghan forces.

If the new American team has some new ideas about how to succeed in Afghanistan, now would be the time to lay them out. Nothing that Alexander the Great, Queen Victoria or Leonid Brezhnev tried in their attempts to subdue the quarrelsome Afghan tribes worked, and nothing we’ve tried in the last eight years has, either.

Galloway ends his piece by reciting the first two lines of this old Kipling classic:

When you're left wounded on Afghanistan's plains
And the women come out to cut up what remains
Just roll to your rifle and blow out your brains
And go to your God like a soldier.