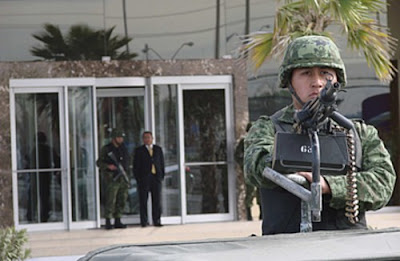 The Mexican army is having its very own surge. The government has ordered an additional 5,000 soldiers to deploy to the border town of Ciudad Juarez.

Juarez lies just down the road from Las Cruces, New Mexico, just a couple of miles from the American border. The drug gangs have been busy lately killing police officers and forced the local police chief to resign this week.

Mexico's war with the drug cartels is huge, involving 45,000 soldiers and 5,000 federal police across the country. The war was responsible for more than 6,000 deaths last year and has already claimed 900 so far this year.

I am so not riding my motorcycle down there again anytime soon.
Posted by The Mound of Sound at 12:31 PM

Email ThisBlogThis!Share to TwitterShare to FacebookShare to Pinterest
Labels: Mexico.

Well that's sure going to water down the ol' bribe pay scale.