Oh Good, We Got a Book! "How to Fix Afghanistan" 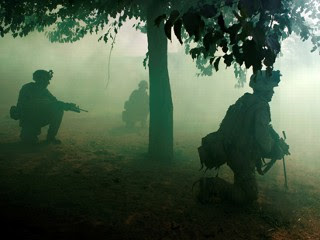 Canada's defence department has just issued its very own, 241-page, counterinsurgency manual. From the National Toast:

A compendium of modern military thinking informed by colonial misadventures and successes, the manual calls for a co-ordinated attack by both political and military forces. "Insurgency is a political problem," reads the introduction. "The mere attrition of insurgents is highly unlikely to result in [their] defeat."

Though the manual urges troops to reject Western absolute values, uses postmodern words such as "meme" and "heuristic," and likens insurgencies to communicable diseases, such approaches are commonly advocated in defence circles, said Prof. Hoffman, a former advisor to U. S. Army Chief of Staff George Casey when he was commanding general in Iraq.

The book also features citations that range from Greek historian Herodotus to Mao Zedong to Black Hawk Down author Mark Bowden.
Prof. Hoffman, whom the book references, said that several allies have already produced similar manuals with much of the same philosophies, most recently the United States.

Now there's a breakthrough. Insurgency is a "political problem." So, tanks and artillery barrages and airstrikes really don't do the trick, eh? Quelle surprise!

Like its U. S. counterpart, Counter-insurgency Operations takes issue with the conventional notions of the victors and the vanquished. "Military forces do not defeat insurgencies; instead they create the security conditions necessary for the political resolution of the conflict," it says.

And how do they "create the security conditions necessary for a political resolution of the conflict"? They do it by securing the local population from the insurgents. That means flooding the countryside with enough troops to keep the insurgents from infiltrating the villages and imposing their will on the populace. That means lots and lots of troops. That means not hunkering down in garrisons. That means doing everything that we're not doing because we don't have more than a tiny fraction of the force required in Kandahar province.

Understanding the root of the grievance, Prof. Hoffman says, helps the military separate the enemy combatants who are fighting for ideology, or those who signed up for money. "You identify and isolate the extremists, and bolster the moderates."

A common pitfall, it explains, imposing one's own values on others. "Such an assumption and situation risks creating or exacerbating the perception that foreigners are trying to impose values and beliefs at odds with those of the indigenous population."

And then there's this closing bit of wisdom from the article.

It also cautions against demonizing or delegitimizing one's foes as thugs, a time-honoured mistake made by former U. S. secretary of defense Donald Rumsfeld and others. "The classification or dismissal of a nascent insurgency as a criminal or some other movement will only fuel the insurgency through inappropriate responses," it warns.

Hmm. Remember the guy who brokered our combat mission to Kandahar, General Rick Hillier? Remember who he described the mission as going into the province to "kill scumbags?" That seems to have set the tone for troops and commanders who went there. I guess Rick hadn't read the memo.