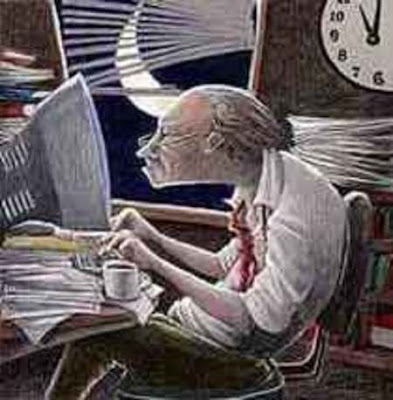 The list of maladies related to excessive working is long and comprehensive. Stress, ulcers, heart attacks are just a few. New research is showing that working long hours increases a person's risk of dimentia.

The Finnish-led study was based on analysis of 2,214 middle-aged British civil servants.

It found that those working more than 55 hours a week had poorer mental skills than those who worked a standard working week.

Lead researcher Dr Marianna Virtanen, from the Finnish Institute of Occupational Health, said: "The disadvantages of overtime work should be taken seriously."

It is not known why working long hours might have an adverse effect on the brain.

However, the researchers say key factors could include increased sleeping problems, depression, an unhealthy lifestyle and a raised risk of cardiovascular disease, possibly linked to stress.

...The effects were cumulative, the longer the working week was the worse the test results were
.
Employees with long working hours also had shorter sleeping hours, reported more symptoms of depression and used more alcohol than those with normal working hours.

My god that read like a checklist of my work environment as little as two years ago.

It led to a mental breakdown and since then I've really cut back the workload.

I've been a lot less stressed and happier overall, so this study parallels my experience exactly.

Welcome to the club. Yet overwork is addictive. It becomes a way of life, a defining purpose, that supplants and excludes far more valuable and healthy components of life.