The Associate Prime Minister of Canada 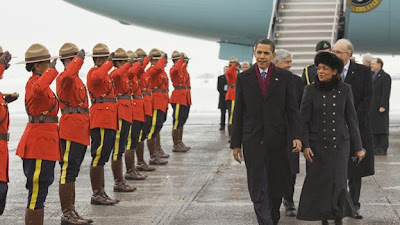 I'm beginning to get the feeling that Barack Obama has become the Associate Prime Minister of Canada.
From what we've seen from Harper and his cabinet, they'll definitely be taking their cues from the president on a host of issues, especially environmental and trade issues. And it looks as though Obama is going to be the one politician who'll tell Special Ed Stelmach to clean up the Tar Sands or else.
Given that Canadians seem to have vastly more confidence in Obama's leadership than anything on offer at home, maybe having an associate prime minister isn't all that bad.
Speaking of associate prime ministers, the other one, Liberal interim leader Michael Ignatieff, was featured in The Guardian today. Here's a sample of Michael Sticking's take on the Liberal challenger:
With an air of haughty detachment, an arrogant sense of entitlement to leadership, limited charisma, Bush-friendly positions on key foreign policy issues, hardly any record on (and relatively little knowledge of) social and economic issues and next to no experience in the political trenches, Ignatieff is hardly the saviour so many Liberals delusionally think he is.
...Today's Canada is very much Trudeau's Canada, the Canada of Trudeau's vision, for better and for worse. Trudeau was, like Ignatieff, an intellectual, but, unlike Ignatieff, he obviously cared deeply about this country and sought to leave his mark on it, which he did. Ignatieff may feel "passionately and proudly Canadian", and there may be a bold vision behind his egotism, somewhere, but he has a lot to prove before he should be considered anything more than an opportunist, if not a self-absorbed charlatan.
http://www.guardian.co.uk/commentisfree/cifamerica/2009/feb/13/michael-ignatieff-canada-economy
Posted by The Mound of Sound at 11:40 AM

Email ThisBlogThis!Share to TwitterShare to FacebookShare to Pinterest
Labels: Obama