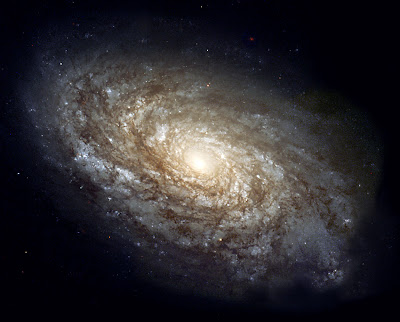 Astronomers are churning the math these days over how many earth-like planets likely exist in our galaxy alone and how many of those probably have intelligent life.

BBC News reports that Dr. Alan Boss of the Carnegie Institution of Science has given an estimate of up to 100-billion earth-like planets in our galaxy, many of them with life forms:

Dr Boss estimates that Nasa's Kepler mission, due for launch in March, should begin finding some of these Earth-like planets within the next few years.

Earlier this month, a study by University of Edinburgh researcher Duncan Forgan was published in the International Journal of Astrobiology estiimating how many of these earth-like planets in our galaxy are likely to have intelligent life. The research indicated at least 361 and possibly up to 38,000.

In his new approach, Mr Forgan simulated a galaxy much like our own, allowing it to develop solar systems based on what is now known from the existence of so-called exoplanets in our galactic neighbourhood.

These simulated alien worlds were then subjected to a number of different scenarios.

The first assumed that it is difficult for life to be formed but easy for it to evolve, and suggested there were 361 intelligent civilisations in the galaxy.
A second scenario assumed life was easily formed but struggled to develop intelligence. Under these conditions, 31,513 other forms of life were estimated to exist.

The final scenario examined the possibility that life could be passed from one planet to another during asteroid collisions - a popular theory for how life arose here on Earth.

That approach gave a result of some 37,964 intelligent civilisations in existence.

Email ThisBlogThis!Share to TwitterShare to FacebookShare to Pinterest
Labels: astronomy

Obviously we need to start work on establishing Starfleet and the United Federation of Planets.

What's that? You want to mobilize the entire Conservative membership? Be sure to send Captain Steve to the bridge ASAP.