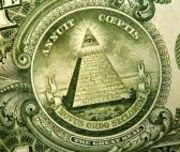 The trouble with wealth is that it's so often tied to debt and yet one thing that history repeatedly shows us is that wealth is notional while debt is as solid as a brick of gold.

The New York Times' Paul Krugman describes America's decade of delusional wealth which some of us know as the Bush Era:

until very recently Americans believed they were getting richer, because they received statements saying that their houses and stock portfolios were appreciating in value faster than their debts were increasing. And if the belief of many Americans that they could count on capital gains forever sounds naïve, it’s worth remembering just how many influential voices — notably in right-leaning publications like The Wall Street Journal, Forbes and National Review — promoted that belief, and ridiculed those who worried about low savings and high levels of debt.
Then reality struck, and it turned out that the worriers had been right all along. The surge in asset values had been an illusion — but the surge in debt had been all too real.

So now we’re in trouble — deeper trouble, I think, than most people realize even now. And I’m not just talking about the dwindling band of forecasters who still insist that the economy will snap back any day now.

...as the great American economist Irving Fisher pointed out in the 1930s, the things people and companies do when they realize they have too much debt tend to be self-defeating when everyone tries to do them at the same time. Attempts to sell assets and pay off debt deepen the plunge in asset prices, further reducing net worth. Attempts to save more translate into a collapse of consumer demand, deepening the economic slump.

...If you want to see what it really takes to boot the economy out of a debt trap, look at the large public works program, otherwise known as World War II, that ended the Great Depression. The war didn’t just lead to full employment. It also led to rapidly rising incomes and substantial inflation, all with virtually no borrowing by the private sector. By 1945 the government’s debt had soared, but the ratio of private-sector debt to G.D.P. was only half what it had been in 1940. And this low level of private debt helped set the stage for the great postwar boom.

Unfortunately we can't muster a peace time equivalent of the state of emergency we all accept in time of war. Too bad.
Posted by The Mound of Sound at 5:48 AM