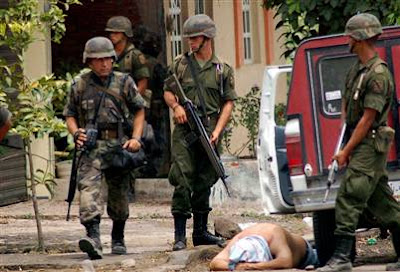 Earlier today I did a post about a US State Department travel advisory for Mexico warning American tourists of the risk of being caught in a full-blown firefight.

There's more. AlterNet has released a story about a 2008 year-end report by the Pentagon that warns of two nations at risk of "rapid and sudden collapse" - Pakistan and Mexico:

"In terms of worse-case scenarios for the Joint Force, and indeed the world, two large and important states bear consideration for a rapid and sudden collapse: Pakistan and Mexico. The Mexican possibility may seem less likely, but the government, its politicians, police and judicial infrastructure are all under sustained assault and press by criminal gangs and drug cartels. How that internal conflict turns out over the next several years will have a major impact on the stability of the Mexican state."

U.S. political figures were ...quick to react -- using the Pentagon's lurid findings to argue for increased military aid to Mexico. As President-elect Barack Obama met in Washington with Mexican President Felipe Calderon on Jan. 12, the former U.S. drug czar, retired Gen. Barry McCaffrey, just back from a meeting in Mexico of the International Forum of Intelligence and Security Specialists, told a Washington press conference: "Mexico is on the edge of the abyss -- it could become a narco state in the coming decade." He praised Calderon, who he said has "launched a serious attempt to reclaim the rule of law from the chaos of the drug cartels." The International Forum of Intelligence and Security Specialists is an advisory body to Mexican federal law enforcement.

Email ThisBlogThis!Share to TwitterShare to FacebookShare to Pinterest
Labels: Mexico

What do they mean "become a narco-state"? You mean it isn't now?