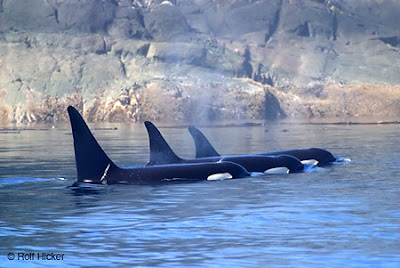 Word has it that the Harper government is going to order the protection of the "critical habitat" required for the recovery of two endangered killer whale pods in British Columbia.

We'll have to wait for another week or so to learn just what Jim Prentice and Fisheries minister Gail Shea are really prepared to do but it's encouraging to hear they've come to realize the problem. From the Victoria Times Colonist:

Ecojustice lawyer Lara Tessaro said she expects the March 4 publication to include a regulatory impact analysis statement, including costs and benefits of the order, from which the public “can glean DFO’s commitment to enforcing this order.”
Environmentalists note the whales are threatened by declining salmon stocks, increased boat traffic, toxic contamination, and acoustic impacts from activities such as dredging, seismic testing, and military sonar.

Ottawa is scheduled to release an action plan within the next four years. That’s where negotiations involving various levels of government and stakeholders, including scientists and commercial fishermen, will face some tough decisions to allow for recovery of the whales.

The situation is complicated by the fact a whale’s habitat is the water column, not a stand of trees necessary, say, for the survival of a bird or mammal.

I hope, in a week or so, I can actually congratulate a Tory for finally doing something right. Until then I'm not going to get my hopes up.
Posted by The Mound of Sound at 5:57 PM