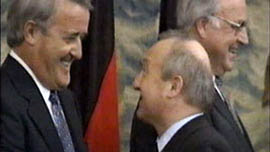 Brian Mulroney cannot accept the normal interpretation of words so he's invented his own. Take his description of his relationship with Schreiber as "peripheral."

By all accounts, Brian Mulroney was not a wealthy man while he was prime minister. We have that from his aide, Norman Spector. When we do have a wealthy prime minister, a Paul Martin or a Pierre Trudeau, we know about their wealth and where it came from.

Do you remember how Mila Mulroney carried on when it was time for them to vacate 24 Sussex Drive? She even wanted the National Capital Commission to pay her for the wallpaper in the place! Finally the NCC cut her a cheque for $150,000 for furnishings the Mulroneys decided to leave behind at 24 Sussex Drive and Harrington Lake but the cheque was returned after a controversy erupted over just who had paid for those furnishings in the first place.

So a man hands Mulroney envelopes stuffed with thousand dollar bills, a hundred grand a pop, three times, and to Mulroney this was "peripheral"? Now it might have been peripheral to a man who was actually vastly wealthy, someone who could leave his public service job, buy a $1.7-million dollar home and toss in a further million dollars on renos. But Brian Mulroney wasn't a wealthy man, was he? Was he?
Posted by The Mound of Sound at 10:07 AM

It’s so nice site. We love to see more on this site. Keep on updating… MonkAreRee Bali ***dfwdertg