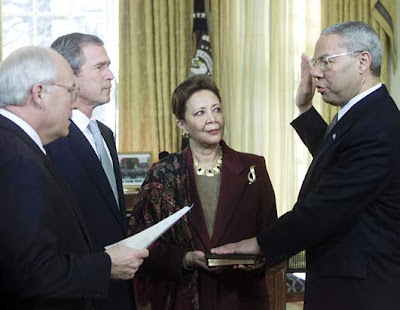 Will Dick Cheney please hurry up and die? And, please, when he does go, let's be sure to put him in one of those containers they use for burying spent nuclear fuel rods so that nothing leaks out - ever.

So what's that bald old Dick up to this week? Well he's jumping into Rush Limbaugh's lap to slam his former colleague, Colin Powell. From Associated Press:

Asked about recent verbal broadsides between Limbaugh and Powell, Cheney said, "If I had to choose in terms of being a Republican, I'd go with Rush Limbaugh. My take on it was Colin had already left the party. I didn't know he was still a Republican."

Powell, who was secretary of state under President George W. Bush and held the nation's top military post under President George H.W. Bush, endorsed Democrat Barack Obama for president last year. Nonetheless, since the election he has described himself as a Republican and a right-of-center conservative, though "not as right as others would like."

Powell has argued the Republican Party needs to move toward the center and reach out to growing black, Hispanic and Asian communities, but instead has been shrinking because it hasn't changed as the country changed in the face of economic distress. "Americans are looking for more government in their life, not less," Powell said last week.

For months, Powell has urged the party to turn away from the acid-tongued Limbaugh. "I think what Rush does as an entertainer diminishes the party and intrudes or inserts into our public life a kind of nastiness that we would be better to do without," Powell said.
"Colin Powell is just another liberal," Limbaugh retorted. "What Colin Powell needs to do is close the loop and become a Democrat." Limbaugh said Powell is "just mad at me because I'm the one person in the country that had the guts to explain his endorsement of Obama. It was purely and solely based on race."

God bless the Repugnicans. As long as they've got Limbaugh and Cheney reading their moral compass they'll just drift into slave state obscurity, right where their kind of trash belongs.
Posted by The Mound of Sound at 10:02 AM

"Will Dick Cheney please hurry up and die? And, please, when he does go, let's be sure to put him in one of those containers they use for burying spent nuclear fuel rods so that nothing leaks out - ever."

LMAO! I laughed so hard when I read that I now have a "stitch" in my side. Seriously. Thanks MoS. ;)

I've been surprised by all of Cheney's appearances in the media. Am so sick of him. Thought we were done with him & that other Bozo - Bush - but the previous admin. just keep poking their heads out & running their mouths, like Condi, eg.

This just shows us they were only using Powell for their own nefarious ends. A man respected by the American public.

Talk about changing parties. The Republicans of 2009 have become the Dixiecrats of 1948.