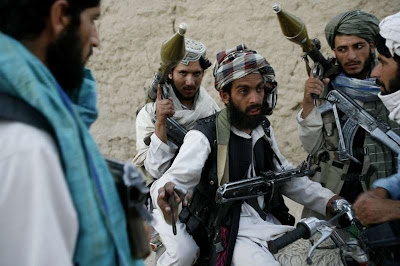 Another major Taliban attack on an Afghan city today, this time the provincial capital Khost.

The insurgents swarmed the city in a multi-pronged attack comprising foot soldiers and a few suicide bombers. The attack opened with the explosion of a suicide car bomb outside the Governor's compound.

The full extent of the operation isn't yet clear but there was one telling episode. Once the gunfire started, the Americans responded by sending a 'quick reaction force' to the battle. The Taliban were ready for them. They had actually prepared an ambush force that, according to reports, caught the Americans by surprise.

The ambush element reveals this as more than one big, hit and run raid. This was a carefully planned military operation. That sort of thing takes time to plan, organize and even rehearse. It takes some doing to muster and deploy these forces undetected and then infiltrate them into a city in American-controlled territory. The attackers would need a lot of local assistance, probably even some collaboration from within the government.

The actual damage inflicted won't be all that great. They are, after all, limited to small arms and a few suicide bombs, hardly the stuff needed to inflict staggering losses on the defenders or the government infrastructure. But that's not what the insurgents are trying to achieve. Their objective is to demonstrate to the Afghan public that they can attack, at will, in an orchestrated fashion - overrunning a city - and the Afghan government, even with American protection, is helpless to prevent it. They're out to undermine the public's confidence in the ability of their government to protect itself and, by implication, the public either.
Posted by The Mound of Sound at 7:37 AM

Almost makes you want to whoop for the Taliban after all the macho talk that they are chickens coming from the Boring Tories...

Remember Hillier dismissing them as just a 'few dozen scumbags' he was going to Kandahar to wipe out? How many successive Canadian generals have boasted that we had these guys on the ropes, heading for oblivion?

At least Obama has figured out he needs a counterinsurgency-warfare commander over there, not another conventional warfare general.