Why Are We Flying Air Death? 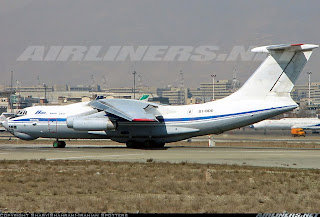 Most humanitarian relief efforts and even major peacekeeping operations rely heavily on air cargo for the supplies needed to keep going. In other words they have to hire private contractors with cargo planes to keep their lifelines open. Now it turns out that most of those contractors work both sides of the street - supplying peacekeepers and NGOs while also ignoring arms embargoes to deliver weapons to any murderous sod with the cash to pay for them.

Evidence that arms dealers have comprehensively penetrated the world market in aid, peacekeeping and stability operations is disclosed in a report by the Stockholm International Peace Research Institute (Sipri). At least 90% of international air cargo carriers named in UN security council and other arms trafficking-related reports have also supplied UN agencies, EU and Nato governments, and non-government organisations, as well as private contractors in Africa, Europe, and the Middle East, it says.

The report, Air Transport and Destabilising Commodity Flows, shows how air cargo carriers involved in humanitarian aid and peacekeeping operations have also transported a range of other "conflict-sensitive" goods such as cocaine, diamonds and precious minerals.

It cites as an example how UN peacekeeping missions in Sudan continued to use aircraft operated by Badr Airlines even after the UN security council said the company should be banned for allegedly breaking arms embargos. Unicef used Juba Air Cargo, also based in Sudan, even though the UN said it had documented evidence showing the company violated an arms embargo, the Sipri report says.

It says DynCorp, a large US private military company which supplies the US army, contracted Aerolift, a company described in a UN sanctions committee report as illicitly supplying arms to al-Shabab, the Islamist group in Somalia.

http://www.guardian.co.uk/world/2009/may/12/aid-arms-trafficking-air-cargo
Posted by The Mound of Sound at 8:16 AM