All They Have Left to Steal 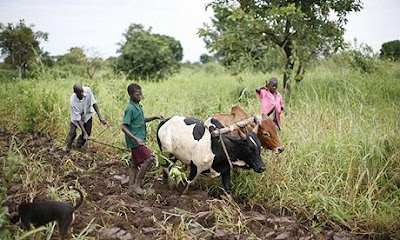 Africa is well steeped in colonialism. For more than two centuries, European masters from Britain to Belgium carved the place up and helped themselves to the spoils the lands had to offer. Africa has been a bountiful source to meet a great many Western needs from hordes of slaves to gold, diamonds and oil. There's a reason Africans didn't get prosperous from that bounty. We pretty much took what we wanted and, when that got tired, we handed those countries over to petty thugs and criminals who did our bidding in the name of their countrymen. All in all it was a good run, so long as you weren't African.

In taking our leave, we bequeathed Africans the gifts of war, plagues and famine. We had carved up the place into nations that reflected the interests of European rulers, not the ethnic and social realities of the local peoples. The mess we left behind can be measured in the millions of innocents slaughtered in states most of us can't even find on the map - Congo, Rwanda, Chad, Nigeria, the list goes on.

Africa is Ground Zero when it comes to climate change. The wretched irony is that most of those hardest hit have a carbon footprint that's barely discernible. Chalk it up to just another gift the West has bestowed on them. But we're not done with these people, not yet. We've taken their natural riches, we've even taken their bodies but they've still got something left - their land.

There's a looming, global food shortage. World food stocks have been shrinking since 1999. For most of your lifetime, the world maintained grain reserves of about 115- 120 days. By 2006, grain reserves had fallen to 57-days, a situation that's going to get a lot worse very, very soon.

Things are changing. In large swathes of the world's food belt water is becoming a critical issue. The two emerging economic superpowers - China and India - are both facing the prospect of mass famine as the Himalayan glaciers that feed their main agricultural rivers recede. By some estimates, India could be looking at the Ganges turning into a seasonal stream, running dry precisely when its waters are needed to irrigate Indian farmland. It's predicted that India could find itself simply unable to feed up to 250,000,000 of its people. China is looking at the same situation, perhaps even worse. You can't let that many people starve without enduring massive social unrest and you do what you can to postpone the inevitable just as long as humanly possible. Just look at the arms races underway in both India and China. Somebody's gearing up for something very, very bad. (Hint to 'Michael' - this is a reality we ignore at our peril)

But what does all this have to do with Africa? Actually quite a lot. The United Nations Humanitarian Affairs office has released a chilling account of how Big Agriculture is moving in on what remains of Africa's best farmland to meet the world's demand for food and biofuel.

Rich countries and firms are leasing or buying massive tracts of land in developing nations for the production of food or biofuel. An area equivalent to Germany’s farmed land is at stake, and tens of billions of dollars on offer.

On the plus side, agro-industrial production could develop underused land, and broaden the world’s food production base while providing much needed resources for poor countries. But is the land really idle and currently unused? Are small-scale farmers going to be “tractored out” in a murky neo-colonial “land grab”?

Food-importing countries that lack land and water but are rich in capital, such as the Gulf States, are initiating deals to produce food in developing countries, where land and water are more abundant and production costs much lower. Vast tracts of land and huge amounts of money are involved: 15 million to 20 million hectares, almost equivalent to the total area under cultivation in Germany, according to analysts at the US-based International Food Policy Research Institute (IFPRI). Investment so far adds up to $20 billion to $30 billion, dwarfing foreign aid budgets for agriculture.

Joachim von Braun and Ruth Meinzen-Dick of IFPRI point out in a new policy brief that developing countries with large populations, like China, South Korea and India, are seeking similar deals, including growing biofuel crops. The institute warned that there was a "lack of transparency" in many deals, with the amounts involved "often still murky".

... in its 2008 report on "land grabbing", GRAIN, a Spain-based NGO that promotes the sustainable management and use of agricultural biodiversity, warned that the "very basis on which to build food sovereignty is simply being bartered away" in the deals.

"These lands will be transformed from smallholdings or forests, or whatever they may be, into large industrial estates connected to far-off markets. Farmers will never be real farmers again, job or no job," GRAIN cautioned.

Various Gulf States have struck most of the deals in East Africa, which is facing some of the biggest food shortages globally. IFPRI's von Braun and David Hallam of the UN Food and Agriculture Organisation (FAO) told IRIN it was "too early" to assess the impact of the deals on food security and farmers in the lessor countries.

Unease, resistance and protests Farming and pastoralist communities in the delta of Kenya's Tana River have reacted strongly to reports of government's intention to lease a chunk of this rich coastal land to Qatar. Kenya is facing huge food shortages and high prices after a third consecutive year of drought.

The spectre of poor countries facing famine selling their best farmland to foreigners, exporting the very food products their own people need, is truly depressing. Is this what we've become?

http://www.irinnews.org/report.aspx?ReportID=84320
Posted by The Mound of Sound at 5:02 AM