What's Next, the English Ocean? 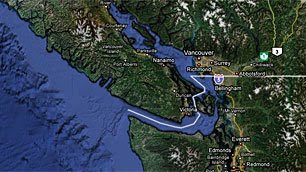 Look at the map. There's the southern part of Vancouver Island. Below it is Seattle and Washington state. To the right is Vancouver and the B.C. mainland. Now check out that narrow ribbon of blue that runs between those points. Does that look like a "sea" to you?

Retired Washington university prof Bert Webber is pushing to have the area roughly demarked by the white line renamed the Salish Sea. Why? Because he's retired and really doesn't have anything else to do.

The word Salish come from the name Coast Salish, the name anthropologists gave to the First Nations language group that resides in the area.

Webber first proposed the name in 1988, but the proposal was soundly rejected at the time. In recent years, the term has caught on with local First Nations leaders and marine biologists, who have started using it to describe the large area of inland waters south and east of Vancouver Island on both sides of the Canada-U.S. border.

"When we meet as the Coast Salish family, the things that tie us together and make us proud of who we are, are things like this," said Harris.

I guess when it comes to that old Spaniard, Senor Juan de Fuca, it's okay to call it a 'strait.' Or maybe that was because it is just that, a strait. Even Juan knew that.

(p.s. when you can see one side from the other side, chances are you're not looking over a sea)
Posted by The Mound of Sound at 7:35 AM

You said:(p.s. when you can see one side from the other side, chances are you're not looking over a sea)You mean like the Sea of Japan, the Red Sea, the Sea of Marmora, or the Caribbean Sea?

Sure dbO, if you go to a narrows you can see across almost any body of water. That's a tad facile. For almost the entire length of the Salish Sea you would be able to see the far shore. Big difference but nice try. I think anyone who's been to the Carib knows you're stretching your point.