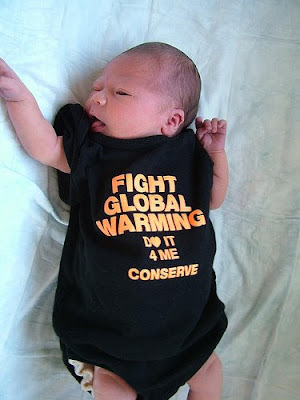 I have long argued that the genetic flaw in Western society, particularly North American society, the missing gene that pretty much dooms us all, is the absense of posterity in our planning.

A couple of months back I took this look at posterity:

Posterity doesn't fit into our economic model of production and consumption because it creates a fetter on both. We have lost our understanding of the importance of posterity to our society, to our country. We no longer plan today for generations to come far in the future. We no longer look much beyond the next electoral cycle.

Protecting posterity is an act of collective consciousness and will. It is acknowledging that we're entitled to our fair share and no more. We can't have it all without depriving future generations of their fair share.

To try to understand the idea of "fair share" imagine if our great, great, great grandparents had followed our path.

Imagine if our ancestors had two things - the ability to consume everything they could get their hands on and a blind indifference to the day when it was our turn to populate this country. Imagine if two or three generations had gone on a rapacious binge gobbling up the world's resources; going into serious deficit on renewables (emptying the oceans, logging off the forests, transforming farmland into desert) and fouling the environment. Then consider how their depredations might impact on your life today. I think that's beyond the imagination of all but the best science fiction writers but that's of no real matter. It's enough in any event to make the case for posterity and the concept of "fair share."

I'm revisiting the subject of posterity today because of an excellent article in The New York Times exploring why Norway, every teabagger's evil empire, is doing so darned well while the rest of the Western world reels under global meltdown:

The global financial crisis has brought low the economies of just about every country on earth. But not Norway.

With a quirky contrariness as deeply etched in the national character as the fjords carved into its rugged landscape, Norway has thrived by going its own way. When others splurged, it saved. When others sought to limit the role of government, Norway strengthened its cradle-to-grave welfare state.

And in the midst of the worst global downturn since the Depression, Norway’s economy grew last year by just under 3 percent. The government enjoys a budget surplus of 11 percent and its ledger is entirely free of debt.

Norway is a relatively small country with a largely homogeneous population of 4.6 million and the advantages of being a major oil exporter. It counted $68 billion in oil revenue last year as prices soared to record levels. Even though prices have sharply declined, the government is not particularly worried. That is because Norway avoided the usual trap that plagues many energy-rich countries.

“The U.S. and the U.K. have no sense of guilt,” said Anders Aslund, an expert on Scandinavia at the Peterson Institute for International Economics in Washington. “But in Norway, there is instead a sense of virtue. If you are given a lot, you have a responsibility.”

Eirik Wekre, an economist who writes thrillers in his spare time, describes Norwegians’ feelings about debt this way: “We cannot spend this money now; it would be stealing from future generations.”

It's hard not to contrast Norway's approach to its oil wealth to that of the Conservative governments of Alberta. The Klein/Stelmach machine is still glued to the fantasy that growth will lift their province out of its problems. And it's not just Alberta. The rest of us would do well to give some serious consideration to this same object lesson. Whether we live in British Columbia or Ontario or New Brunswick, we all need to grasp the idea that posterity is the lifeblood of our nation's future.

Email ThisBlogThis!Share to TwitterShare to FacebookShare to Pinterest
Labels: Posterity