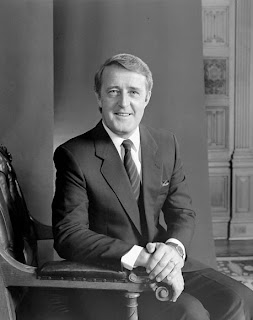 Stephen Harper as Eurystheus. Brian Mulroney as the sly King Augeas. Jeffrey Oliphant as Hercules, charged by Eurystheus to clean the stables befouled by Augeas' cattle.

Oliphant's task is Herculean. He has to listen to one of the most powerful prime ministers in Canadian history describe a course of shady dealings and then decide how much of what he hears can be believed. He has a lot of crap to shovel his way through. It's dirty and it smells.

Nobody can avoid noticing how furiously Mulroney, under examination by inquiry counsel, is spinning his evidence. Time after time when asked a direct, simple question, Mulroney uses it as an opportunity to slip into a repetitive churning over of facts and allegations that he claims exonerate him of all wrongdoing. It's positively tiresome. It's as though he's waving his arms at Oliphant and yelling, "no, don't look over there, look over here, over here."

I think Mulroney has tripped himself up over his account of how he treated the cash, or at least as much of it as he admits having received from Schreiber.

If there's one thing that fledgling lawyers have drummed into their pointy little heads, it's the concept of trusts and retainers. Clients are normally required to give counsel money in the form of retainers, essentially security against fees and expenses to be incurred. Lawyers have to treat those retainers according to very specific rules. Those rules govern how the money is received, how it is held and how it is eventually disbursed and accounted for to the client.

Mulroney couldn't give a straight answer about how he received, how he held or how he disbursed the Schreiber money. His tax lawyer told the Canadian Revenue Agency in his 'voluntary disclosure' that the money was earned by Mulroney in 1993, 1994 and 1995. However that's not what Mulroney told Oliphant.

Mulroney's version is that the retainer was an ongoing matter until 1998, the last year he did any work for Schreiber, apparently on some pasta project. It was only when Schreiber was charged in Germany with tax evasion that Mulroney ended the retainer at which point he took his payment, i.e. all the money. Mulroney insisted that, prior to that point, he didn't touch the money because it wasn't his.

The inquiry counsel, Richard Wolson, asked a telling question. Why, if Mulroney believed he hadn't earned the income until 1999, didn't he just declare it as income in that year instead of retaining a senior tax lawyer to tell the tax authorities that it was undeclared income from 1993 to 1995? Mulroney almost suggested that his tax lawyer simply made up the timing of the income in his voluntary disclosure.

In the greater scheme of things, how Mulroney dealt with the taxes on his Schreiber money may appear inconsequential but this is a case full of undocumented agreements, dead witnesses, false statements, inconsistencies and conflicting claims. To sort through that Oliphant is going to have to read tea leaves, the indirect evidence. You have to weigh how witnesses performed under questioning. Where they forthright and candid or were they evasive and incredible? You look at what is clear from whatever hard evidence you do have, what is unclear or inconsistent and what is missing that ought to be there. That is what Mr. Wolson has been doing, putting together a picture piece by piece. He doesn't have any real smoking gun here. This is going to come down to questions of credibility and, as far as I can tell, on that score Mulroney has done himself no favours.
Posted by The Mound of Sound at 5:15 PM

I think what Mulroney is saying is that, “ Who are you going to believe? Me, the former PM or the shady character who is sitting in jail. Schreiber who was going to be deported and cooked up the story to avoid deportation and succeeding” and Mulroney is succeeding in that strategy. General public may not buy his excuses but legally he may not be found culpable. No smoking-gun so far.

I disagree. I don't think Mulroney is succeeding at all except on the most cursory level. He's not been able to talk his way out of some serious inconsistencies and contradictions. Significant portions of his inquiry evidence do not square with established facts. This drove him back onto some pretty obvious talking points again and again whenever he was confronted with awkward questions.

Don't forget, this is not a criminal trial, merely a commission of inquiry. Oliphant is sitting as a commissioner, not a superior court judge. Oliphant is not obliged to rule whether Mulroney is culpable of anything nor is he obliged to ignore the testimony and absolve him if he can't reach specific conclusions.

From what I've seen I think it's entirely open for Oliphant to find Mulroney and Schreiber to be birds of a feather.

Hold your conclusions until Schreiber's lawyer has his chance at Mulroney tomorrow. He's in a much different position vis a vis Mulroney than Wolson. I see all sorts of openings in Mulroney's testimony so far that Schreiber's counsel can exploit.

"..Mulroney and Schreiber to be birds of a feather." Mound, I do not disagree. All I am saying is that Mulroney is playing the game, "whom are you going to believe?" I haven’t found Oliphant particularly hard-hitting. You’re right about his mandate.
Tomorrow indeed will be interesting.

I'm not sure that Oliphant is supposed to be 'hard hitting.' He's a commissioner, assigned to take evidence adduced by counsel, evaluate it and report on his findings. His role isn't adversarial.

Oliphant has got plenty of hard hitting in front of him among the ranks of counsel present. I'd be concerned if he wasn't maintaining a good distance between himself and the witnesses.

"I think Mulroney has tripped himself up over his account of how he treated the cash, or at least as much of it as he admits having received from Schreiber."

And also by it now being known that he paid taxes on only 1/2 of it. If the amount of $275,000 is correct. Who knows. The whole damn thing stinks. Mulroney is nothing but a scam artist, a charlatan of the highest order. His greed knows no bounds.

Playing the sympathy card over & over & over by bringing his family into it & the effect on them from the Airbus scandal & this now is driving me nuts. It pushes me even further away as I'm sure it does many others. Crocodile tears never play well.

I have no idea what kind of person Oliphant is but at times it feels like he is being very sympathetic towards Mulroney & other times not so much. As much as Mulroney drives me crazy with his long-winded monologues, repeating over & over, etc., I just can't tear myself away from watching/listening to this damn liar.

"Justice Jeffrey Oliphant, presently the Associate Chief Justice of the Manitoba Court of Queen's Bench was appointed in 1985. The Prime Minister at the time was the Right Honorable Brian Mulroney. Prime Minister Mulroney was still in power when Oliphant received a promotion from the federal cabinet in 1990 to become the Associate Chief Justice." Were you aware of this?

Actually LD I had some knowledge of Oliphant's appointment and elevation on the bench. There were only two choices, someone appointed by a Liberal or someone else appointed by a Tory.

Fortunately in Canada, judicial appointments haven't been as crass as they so blatantly are in the United States. In Canada our justice department has made a practice of consulting the provincial law societies and bar associations for their recommendations on candidates and it's worked fairly well. At least well enough that Oliphant should be given the benefit of the doubt unless and until you see anything that's blatantly partisan from him and I haven't yet.

Oliphant knows he's been handed a hot potato and all eyes are on him. I doubt he wants his legacy to be that he shilled for Mulroney. Remember, BMPM doesn't have much political capital these days and his performance so far won't earn him a ticket back into the good graces of today's Tories either.

Oh,and Penlan, the fact that Mulroney got a "sweet deal" on his tax disclosure isn't all that surprising or that unusual. It's just that it's the sort of thing that rarely comes to the public's attention.

Had it been an ordinary guy who didn't have the bucks to hire a big gun tax lawyer and the revenuers caught him it would have been payment in full plus interest plus penalties and the prospect of a criminal conviction and fine to boot.

It's a sad reality in Canada (and most Western states) that you, as a citizen, usually get all the justice you can afford.

Mound, you have more faith in our justice system than I do. Nothing wrong with that. I have known certain political appointees to the judiciary. Scares the dickens out of me.

Mulroney's tax lawyers negotiated a sweetheart of a deal, without naming him prior to these negotiations. Maybe it's time the CRA publicly start making the same anonymous disclosures for all Canadians to see. Will Quicktax be offering the Mulroney exemption in future versions of their tax software?

Forget about a two-tiered medical system, Canada has a two-tiered legal and tax regime. One for a select few with the means and the the rest of us!

I'm starting to see how the citizens of France felt in 1789!!

Auge's voice is grating on my nerves. Between him & Mulroney I just may have to tune out for awhile...

Ken, I'm sorry to say it but you're absolutely right and it's always been that way. The very best lawyers, those who consistently get the best results, are very expensive. Just like the guy who scores the most goals or hits the most homers.

There are some excellent lawyers who work for poor people but they're the exception. As a general rule, the mall lawyer doesn't practice at the same level as the guy in the high-powered firm on the 35th floor of the downtown tower.

And Penlan, I just tuned in. You're right about Auge's voice and his delivery!