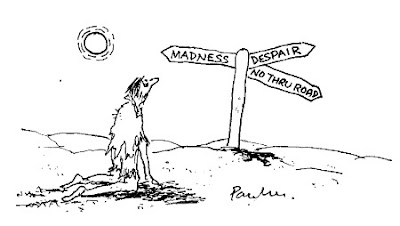 Thirst - conjures up scenes of lost souls crawling across deserts or adrift on the ocean in lifeboats. It always produces an intense feeling of human vulnerability.

What we are going to have to start thinking of is thirst on a national, even regional scale, thirst that besets hundreds of millions of people. That's beginning right now, in India and China. The Reuters news agency reports that India may soon be forced to buy freshwater for some of its people. For some time now residents of some major Indian cities have been dependent on privately operated water trucks, their municipal water systems hopelessly overwhelmed. Now it's the really poor people in the countryside that are awaiting the sporadic arrival of the water trucks: http://www.alertnet.org/thenews/newsdesk/124270350152.htm

The situation is worse in India's next door neighbour and emerging superpower rival, China. Like India, China faces a general water shortage that's only going to continue to worsen as the Himalayan glaciers recede. But China treats its already limited surface water as an industrial waste disposal system, rendering enormous amounts of what remains unsafe for human consumption, some of it unfit even for irrigation.

Faced with an immediate problem, China is resorting to a massive, 'go for broke' solution that may not work and risks severe ecological blowback in the future. The report from today's Guardian delivers a sense of silent desperation, even recklessness, on the part of China's government: http://www.guardian.co.uk/world/2009/may/18/china-water-crisis

What emerges from these stories is that neither country really has a viable, long-term response to its growing freshwater crisis. India seems bogged down in bandaid measures. Yet Mubai seems the least worrisome at the moment. For all we see China as a totalitarian state, it is remarkable how feeble is Beijing's control over its own provinces, their governments and industries. There's a really eerie element of institutional anarchy suggesting that China has all but lost control over its industrial revolution.
Posted by The Mound of Sound at 6:39 AM

Email ThisBlogThis!Share to TwitterShare to FacebookShare to Pinterest
Labels: freshwater