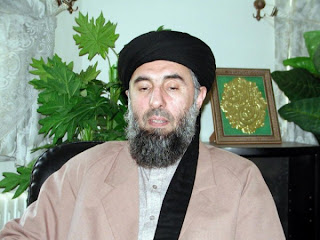 The Times of London reports that Afghan president Hamid Karzai is offering a power sharing deal to Gulbuddin Hekmatyar. GulHek is a lot like a monster without the Hollywood special effects.

Gulbuddin Hekmatyar, who is on America’s “most wanted” terrorist list, is to hold talks with the Kabul government within the next few weeks.

Hekmatyar is the leader of Hezb-i-Islami, which has been fighting Nato troops alongside the Taliban. The hardline group is responsible for many attacks in the eastern and central regions, including the massacre of 10 French soldiers in Sarobi last year. It controls Kapisa province, just 50 miles north of Kabul.

The party is expected to be offered several ministries and provincial governorships in return for laying down its arms and agreeing not to disrupt the presidential elections due in August.

Hekmatyar is, how can I put this, an evil bastard. From http://www.warlordsofafghanistan.com/:

In a Hollywood movie Hekmatyar would be the evil foil to the heroic Masud. He would be an angry Islamic fundamentalist dressed in black, throwing acid in the faces of unveiled women and assassinating local tribal leaders that might rival his power. He would be the pawn of foreign secret service paymasters like the ISI, CIA, and Prince Turki of Saudi Arabia. He would unfeelingly sacrifice peasants for his cause, rocket the helpless civilians mixed in with his enemies, and his ruthless ambition would prevent the creation of a new peace. Unfortunately, in real life Hekmatyar was all these things.

...When Masud finally defeated Najibullah in 1992, all the mujahideen factions converged on Kabul. Masud outwitted Hekmatyar and slipped into the city before him. A round robin of side-swapping, backstabbing, and massacre among Hekmatyar, Masud, Dostum, and Mazari followed. The citizens and buildings of Kabul were the big losers. The problem was that Masud could not be president as he was a Tajik, not a Pashtun. Afghan kings had been Pashtun for hundreds of years. Hekmatyar was the most powerful Pashtun, and had he not been such an evil sod, Masud might have accepted some kind of deal. In the end neither prevailed. The ISI switched support from the stalemated Hekmatyar and backed Mullah Omar, the new leader of the Taliban.

After years in exile in Iran, Hekmatyar returned to Afghanistan and raised another militia once the Taliban were run out of Dodge. This time, however, he threw his hand in with his former rivals, the Taliban. It should be nice having Hek back in his old stomping grounds (he really did stomp the place), Kabul.

This is it, folks. The warlords have won.
Posted by The Mound of Sound at 6:50 PM