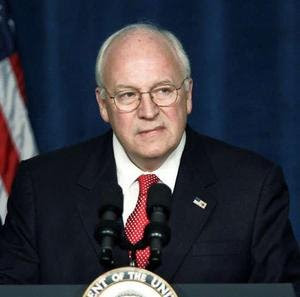 Thanks to McClatchey Newspapers, Dick Cheney will never be able to escape the fact that, under his command, terrorism suspects were tortured to gin up evidence of a link between al-Qaeda and Saddam Hussein.

Here's what that Dick told the Rocky Mountain News back in 2004:

"The (al Qaida-Iraq) links go back. We know for example from interrogating detainees in Guantanamo that al Qaida sent individuals to Baghdad to be trained in C.W. and B.W. technology, chemical and biological weapons technology. These are all matters that are there for anybody who wants to look at it."

This bastard is sick beyond belief. I'm sure Satan is starting to get impatient waiting for his rotten heart to explode.
Posted by The Mound of Sound at 12:13 PM

You probably also remember that as recently as March of this year, Ari Fleischer, Harper's new fluffer, was defending Bush and Cheney on Hardball thusly :
After September 11, having been hit once, how could we take a chance that Saddam might not strike again?

Alison, that was priceless. I hadn't seen that but it's absolutely perfect! Thanks