Why Are We Still Propping Up Karzai? 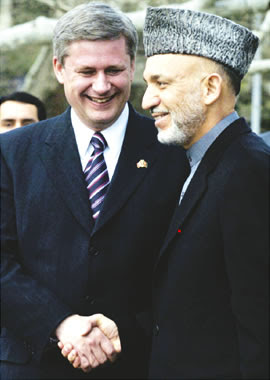 Great. Just as the furore was dying down over Hamid Karzai getting caught signing into law a matrimonial rape bill, we learn that he's chosen a brutal warlord for his running mate in the upcoming elections. From The Guardian:

Senior diplomats and human rights workers lashed out at Hamid Karzai's decision today to select a powerful warlord accused by western officials of involvement in criminal gangs and arms smuggling as a running mate in Afghanistan's presidential election.

Karzai's decision to defy international pressure and appoint Mohammad Qasim Fahim as one of his two vice-presidential candidates for the 20 August poll showed the world and the Afghan people that the president was "moving the country backwards", said a western diplomat in Kabul, who is close to the UN chief in the country, Kai Eide.

...The former militia leader, who goes by the honorary title of Marshal Fahim, is disliked by many Afghans suspicious of the wealth he has acquired since 2001 and disliked by the west for his opposition to the disbandment of the private armies of Afghanistan's warlords. An official with an international mission in Kabul said Mr Fahim had been linked to kidnap gangs operating in the capital. He is also accused of murdering prisoners of war during the mujahideen government in the 1990s.

At some point we're going to have to face up to the facts. We've been propping up what amounts to a criminal enterprise for the last eight years. Anyone who thinks anything good can possibly come out of that is an idiot. I guess that makes Steve Harper an idiot.

Another fact we're going to have to come to grips with are the indisputable consequences of treading water in a counterinsurgency war for eight years. Our eight years of indifference and neglect has merely served to broaden the insurgency, adding to the Taliban ranks a disparate collection of criminals, warlords and ordinary nationalists wanting the infidels out of their country.

It's too late for us to nuke Karzai. We just don't have enough popular support or even trust among the Afghan people to attempt to install our own replacement and most of the homegrown alternatives to the current president are seen as even worse.

And for this we're willing to risk breaking NATO? Incredible.

http://www.guardian.co.uk/world/2009/may/04/afghanistan-president-hamid-karzai-election
Posted by The Mound of Sound at 11:35 AM

“..Obama intends to maintain an arm's-length relationship with Karzai in the hope that it will lead him to address issues of concern to the United States, according to senior U.S. government officials. The administration will also seek to bypass Karzai by working more closely with other members of his cabinet and by funneling more money to local governors.”
This is from Washington Post.

MoS, you may consider to read the whole article here.
http://www.msnbc.msn.com/id/30591611
It looks that the only buddy Karzai has left in North America is Harper.

Curiously enough, LD, some are saying that the rift between Washington and Kabul is actually helping Karzai, drawing more Afghan support to him. It's a reflection of the growing Afghan discontent with Infidel armies occupying the place. That, in turn, is consistent with the growing support the insurgents claim to be receiving from Afghan villagers.

Thanks for the link.

"It's a reflection of the growing Afghan discontent with Infidel armies occupying the place." Right on.

I heard this story about a professor of mine. He was travelling east by air. Passenger sitting next to him was very curious about his religion. Professor won't respond. Finally the fellow passenger said,” why are you not responding? Are you’re an infidel?" Professor responded, "yes you for me and I for you." This infidel thing works to incite folks. More so in areas where literacy rate is very low.

Yeah, I posted that video a couple of days ago. It's really astonishing that the Yanks would let these people put their own soldiers and ours in harm's way with this nonsense. Harper's magazine has an excellent article on how religious fundamentalists have grabbed the levers of power within the US military, using their influence to turn the military into an instrument of what they perceive to be God's will.