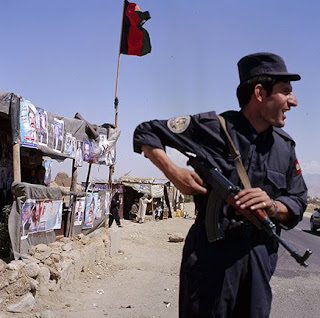 The Canadian Forces have a problem they'd very much like to just go away.

It all surrounds complaints by Canadian soldiers of having to stand by, helplessly, as their Afghan counterparts sodomized young boys. When the story broke it caused a furore, leading the Canadian Forces to launch an internal investigation into how our military police handled the complaints. Just fine, says the report:

"It was determined that the initial allegations concerning such incidents contained serious discrepancies, could not be corroborated, were not reported to the chain of command and ultimately were not substantiated," said a statement released Tuesday by the Canadian Forces National Investigation Service.

The investigation concluded that no Canadian Forces personnel committed "any service or criminal offences in relation to the alleged sexual abuse of Afghan male children."

"It seems there is a total washing of the hands. To our knowledge, it was reported to the chain of command," said Harris, whose party first raised the abuse allegations in Parliament.

"We've got people on the record saying that not only did they witness this abuse but they reported it, and yet this investigation result says there was nothing reported to the chain of command. Something is wrong with this picture."

What's seemingly not being disputed (for good and ample reason) is that Afghan security forces, the guys on our side, have a fondness for little boy bum. They do. It's part of the whole warlord culture. In fact it was this practice that was a key to the Taliban coming to power. The Talibs didn't approve of pedophilia or sodomy and forcefully intervened to rescue a young boy from the clutches of a warlord. Afghan villagers thought it was pretty nice to be able to take their sons with them to market without having to fear some thug grabbing them for his sexual gratification.

Taliban gone/sodomy back. This is from The New York Times, February 21, 2002:

"Though the puritanical Taliban tried hard to erase pedophilia from male-dominated Pashtun culture, now that the Ministry for the Promotion of Virtue and Prevention of Vice is gone, some people here are indulging in it once again.

"During the Taliban, being with a friend was difficult, but now it is easy again," said Ahmed Fareed, a 19-year-old man with a white shawl covering his face except for a dark shock of hair and piercing kohl-lined eyes. Mr. Fareed should know. A shopkeeper took him as a lover when he was just 12, he said.

An interest in relationships with young boys among warlords and their militia commanders played a part in the Taliban's rise in Afghanistan. In 1994, the Taliban, then a small army of idealistic students of the Koran, were called to rescue a boy over whom two commanders had fought. They freed the boy and the people responded with gratitude and support. "At that time boys couldn't come to the market because the commanders would come and take away any that they liked," said Amin Ullah, a money changer, gesturing to his two teenage sons hunched over wads of afghani bank notes at Kandahar's currency bazaar.

For some reason we'd rather not discuss the fact that the ally we're supposedly propping up has an open penchant for pedophilia, forcible boy rape. Maybe that's our problem over there; our soldiers are only allowed to shoot in one direction.
Posted by The Mound of Sound at 4:54 PM