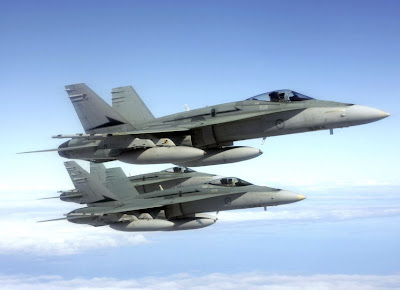 When it comes to the arms races now underway Australia is something of a miners' canary and, right now, it's a bird that deserves a lot of attention.

Australia is afraid, seriously afraid of the massive rearmament programmes underway in India and China. Afraid enough that prime minister Kevin Rudd has announced a $75-billion expansion plan for his country's military forces.

Included in the shopping list are 100 F-35 multi-role fighters plus a dozen hunter-killer submarines atop a gaggle of other acquisitions and upgrades. You can find the Australian government's defence White Paper here:

Sooner or later, some Canadian leader is going to come to his senses and address the global security challenges facing our own country. Strategic balances, especially in Asia and the Pacific Rim as well as the far north, are in a genuine and destabilizing state of flux. Not only are these emerging economies expanding their defensive - and offensive - military capabilities but they're also engaging in quiet campaigns of containment. Ignoring those realities could leave us in a very uncomfortable position.
Posted by The Mound of Sound at 11:53 AM

Australia must look like a tempting snack to India, and China, as well as Japan. In Canada we have the luxury of sharing our continental defence with the overwhelming US of A, while Australia has had to fight to keep their land just 60 short years ago, against Imperial Japan. I would guess that they're looking at pretty well the best mix of defensive forces, although 12 submarines won't go very far against either China's rapidly improving Navy, or the existing Indian bluewater fleet(s). I guess they're really counting on the airforce, while the subs can provide a screen, and counterforce for any Carrier groups that may be thrown their way. I guess the price tag says it all though. Sufficient force to take on, and beat the regional powers would cost 100's of billions, so deterrence is the objective. I would also muse, (to myself), how long until Japan decides that Self-Defence forces are for pussy's, and it's time to have another go at securing resources by force majeur? In that event, Australia is hanging out on a limb. Something for the next generation to think really hard about.

Mound, are you serious? Can Canada ever defend itself militarily? We heavily depend on our neighbour US.

I think Japan is already on the brink of scrapping the self-defence force farce. The Americans are certainly pushing for Japan to take a direct, security position in their region.

From what I've seen both China's and India's navies are largely focused on each other. China also wants to be able to maintain at least temporary control of the Taiwan Straits, possibly the Spratleys too.

Still, both are probably going to outgrow these regional scenarios of they survive long enough to actually become stable economic superpowers. Somehow I don't see that happening in either China or India. Both have too many social, environmental and geopolitical hurdles to clear and I don't think time is on their side.

LD, the alternative to creating a meaningful self-defence force for Canada is to yield sovereignty to the United States. As Gwynne Dyer pointed out, in the context of the coming climate wars, the nation each country must fear is the one that stands nearest between it and the equator.

Ignoring this reality will not bode well for our country. At some point we need to wake up - or give up.

I understand what you're saying Mound, but I don't think there's much of a middle ground for us. It's either go big or go home.

If we ever decide to build an army large enough to repel an American invasion, there is no way of doing so without massive deficits (or a huge slashing of social programs) and mandatory military service programs.

Simply put, it would mean giving up a lot of the privileges, prosperity and freedoms that we Canadians have come to enjoy.

I am inclined to agree with Fish. Moreover, Mulrony turned us into 51st state and Harper has put finishing touches to it.

It's not necessary to establish a standing force capable of defeating America. The example of 20th century neutral states like Sweden or Switzerland gives an idea of what's required.

Don't forget, America's troubles in Iraq began AFTER they had swept aside Saddam's conventional forces. And there's no way that America would want to tie down its forces in an occupation of Canada when there would be so many much larger, more dangerous threats from Eurasia, South Asia and Southeast Asia.

The paranoia deliberately engendered to build support for the American Israeli Middle East colonial wars or "War on Terror" seems to be spreading rather than diminishing. How much longer will it be before every nation capable of building one decides that it needs nuclear weapons to protect itself?