About Those Weapons We're Selling to Saudi Arabia 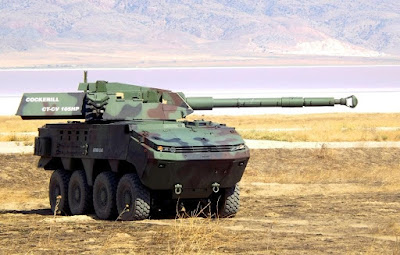 The Trudeau government has no intention of axing the deal negotiated by the Harper regime to flog $15-billion worth of armoured fighting vehicles to Saudi Arabia. The government won't explain itself nor does it have any intention of letting the public see its assessment of the Saudis' human rights record (not that anyone really needs to see it to know the Saudis running the place are animals).

Here's something for young Justin to chew on over the weekend.

Ban Ki-moon, the U.N. secretary-general, warned Friday that a Saudi-led air coalition that is supported by the United States may have committed war crimes by using cluster munitions in heavily populated neighborhoods in Yemen.

Only there's nothing new to this story. Vice TV exposed the cluster bombing of the Houthis last February.  You can pick it up at the 17:05 mark.

The video shows the cluster bomb casings. They're US made. The Saudis have been pounding the Houthi people with them for a good long while. There's no way our diplomatic and military people didn't know. The world knew only nobody in positions of power let on.

So, Junior, you're selling those wheeled death machines to fucking animals, the kind who don't think twice about raining cluster bombs on civilians - women and children. You don't need to show us your in-house human rights evaluation. There's nothing to conceal.

One other thing. Before you shatter our dreams about Canada being "back" why don't you have a word with your colleagues in Belgium and Germany. Maybe they can help you grow a new pair.

And, Junior, when you're finished that video check out the first segment which is an eye-opener on what we can expect from the fossil fuelers when - not if but when - one of those bitumen tankers goes down along the British Columbia coast. You may be against the Northern Gateway but you're backing Kinder Morgan's equally dangerous expansion of its bitumen pipeline capacity straight into the Lower Mainland.

There you go, JT, a two-fer.  This one's on the house. You're starting to show us what we really bought last October and it's not very pretty.

.. there's times Mound when I imagine down to the most macro level, the odd conversations that must take place in the Harper household.. and now in the Trudeau household. I start to play them out as dialogue between two people, in a certain setting.. the kitchen, bedroom or backyard. As much as I like satire, I like to anchor my imaginings around reality. As such, we can presume Stephen and Laureen Harper actually conversed.. same with Justin and his wife. It could be conversations while watching the news on TV.. or while driving to a social event such as a fundraiser etc. Perhaps I'll send a sample off to you, very minimal.. based on say, the Saudi Arms Deal, as that's quite contemporary.. but the field of opportunity is very ready for harvest.. a bumper crop so to speak.. and now young middle aged Justin has taken over Harper's bitter fields & fiefdom.. Thus I could and should visit both Harper and Trudeau with my imaginings. I mean just imagine a private conversation by either family regarding Christy Clark ! Or regarding that very odd fellow named Jason Kenney? Or regarding Ray Novak.. or Arthur Hamilton.. ! Or on International or Diplomatic topics.. say uh, Israel or Yemen? I laugh hysterically just thinking about Stephen Harper and Ray Novak chatting about Laureen behind her back.. oh deary me..... ...

Wow, that's an idea Sal. Do please send something along.

Your post clearly shows that Canadians have every reason to be disenchanted over our new government's endorsement of this sordid Saudi deal, Mound. The only thing that stands a chance of preventing any future transactions with such devils is constant public vigilance and exposure of such shameful transactions.

After such a promising start this is hard to take from JT, Lorne. If other countries can suspend arms deals with the Saudis why should Canada honour our deal - although I suppose I could come up with 15-billion reasons. Canada's back, really? Maybe, just not in the way we had hoped. An enquiry into missing native women, great. Taking the gags off federal scientists, wonderful. Ending mandatory minimum sentences, terrific. But those are all very low-hanging fruit. They don't require any courage. TPP, weapons sales to Saudi, the Kinder Morgan pipeline, reversing inequality, effective action on climate change - those are the tough ones, the sort of challenges that take the courage of Trudeau Mk.1.

I had only a passing awareness of the Houthi uprising in Yemen before I watched the VICE TV video when it aired on HBO Canada. Then I looked into it only to find that the VICE episode was very accurate. With their under-the-table support of radical Islamism we ought to have cut the head off that snake years ago but, instead, we load them up with all the high-tech weaponry money, oil money, can buy. No one, especially in Ottawa, seems to wonder just what Saudi has in mind for that massive arsenal of tanks, armoured fighting vehicles, artillery, jet fighters and fighter-bombers, etc. We act as though we were selling them a shipload of softwood.

While I am not in favour of selling arms to Saudi Arabia , I am more upset that the advice in the briefing books. Is Fort Pearson occupied by quasi-American cold warriers fighting the 1960's good fight against Russia ? Is the vision for a new American century blinded them to the facts spread before them.

Trudeau ( and Dion's ) may have decided not to die on this hill, but I hope they find a way to get better advice soon.