Back to the Drawing Boards. Sea Level Rise Will Be Twice What We've Been Told to Expect. 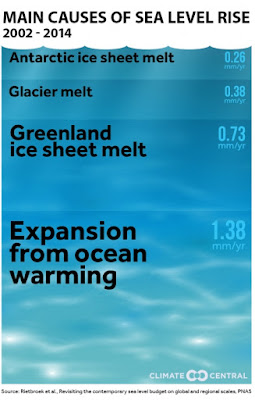 Researchers from the University of Bonn have found that we have underestimated sea level rise due to ocean warming by about half.

“To date, we have underestimated how much the heat-related expansion of the water mass in the oceans contributes to a global rise in sea level,” said co-author Jurgen Kusche, a professor at the University of Bonn.

The overall sea level rise rate is about 2.74mm per year, combining both thermal expansion and melting ice.

Sea level rise was also found to vary substantially from place to place, with the rate around the Philippines “five times the global rate.”

The UBonn research has put a few noses out of joint but it's understood the conclusions will be corroborated by new research soon to be released by NCAR, the US National Center for Atmospheric Research. 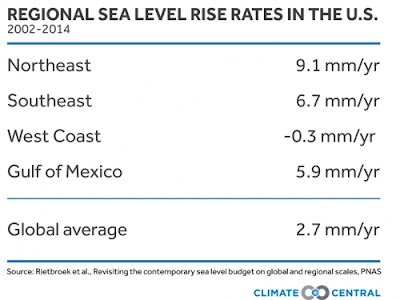 Actual sea level rise varies substantially from area to area as this graphic of US SLR illustrates.

As shown, here on the Pacific coast, sea levels haven't risen as they have elsewhere. It turns out that the winds took our warming and drove it to the ocean depths, part of the Pacific Decadal Oscillation.

That won't last long. The Pacific is now releasing that stored heat to the surface and it'll be coming our way. Sort of like catch-up.

What we're only now discovering is that governments can squander massive amounts of money engineering to meet the wrong threat. If the decision makers choose to go with the original IPCC estimates of one meter of sea level rise by 2100 but ignore subsequent science concluding it will actually be two to three times that, then you've bet the farm on the wrong horse. Adios farm.

What I expect is accelerating effects. Each year all the climate change numbers will be worse than the year before. Most people won't notice until they see the the oceans rise measured in metres per year which, because of the compounding effect, will happen much faster than popularly believed.


The impacts are accelerating far more rapidly than we had imagined even a few years ago, Toby. A good bit of research is going on into "doubling ratios" of the physical effects.

As civilization goes I suspect the telling factor will be the synergy of a variety of accelerating impacts on human resilience and our complex but vulnerable modes of organization.

Meanwhile, we've got bitumen to move.

How different rates of rising and thus PERMANENT change of levels of oceans are possible when all oceans are connected?
A..non

Mound, if you haven't seen it, this is worth while.

"THE MOST IMPORTANT VIDEO YOU'LL EVER SEE!"

It's all about exponential functions and applies to so much of what we are witnessing today such as population growth, Peak Oil and global warming.

@ A..non - a lot of it is due to differential rates of ocean warming, itself a function of ocean depth, deep currents, proximity to polar ice melt, etc. Different forces are at work in the Pacific than in the Atlantic but it seems there'll be a catch up period soon enough.

Yes I've watched it a couple of times, Toby, and I'll watch it again - and again.

regarding anon's question on differing rates of sea-level rise in different locations:
apparently gravitational effects play a large role, mainly due to loss of mass in areas that previously had water locked up in ice. this effect started being more widely reported on about a year ago.
here is one of the main researchers lecturing on the subject if anyone's interested(30min):
https://www.youtube.com/watch?v=RhdY-ZezK7w