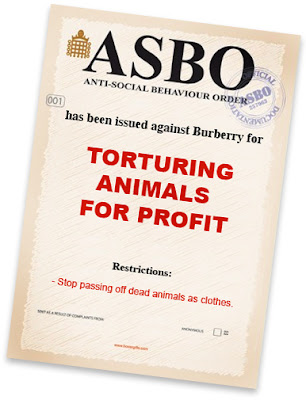 In Britain they had this ASBO thing. ASBO stood for Anti-Social Behaviour Order, a civil injunction whereby an individual, ordinarily a juvenile, could be ordered to refrain from offensive behaviours - spitting on passersby, swearing, public drunkeness - that sort of thing.

I mention ASBO only in support of a proposal whereby Canada should implement something similar, let's call it CASBO, a Corporate Antisocial Behaviour Order. Like ASBO, CASBO injunctions could be used to forbid corporate "conduct which causes or is likely to cause harm, harassment, alarm or distress" to the public.

Whereas in Britain an ASBO could be issued to curtail a graffiti artist from defacing public property, a CASBO could be used to forbid a company from abusing its advantage in wealth and power to resort to SLAPP suits, lawfare, to censor, intimidate and silence critics.

In Britain, ASBOs were used to curb a variety of ill-behaviours ranging from vandalism to public defecation, noise pollution, intimidation, disturbing the peace, fare evasion on public transit, mainly petty stuff that really pissed people off. It's not hard to come up with equivalent corporate misdeeds. In fact it's really easy.

Like ASBOs, CASBOs should be a civil injunction with provision to lead to criminal sanctions if the offending behaviour persists. Only CASBOs could have one additional feature. Once issued they should trigger a provision whereby, if the prohibited conduct persists, criminal liability should extend beyond the company to include the "directing minds" responsible for it - management and the executive. Give them a criminal record and a little time in the Greybar Hotel to go with it.

Why should we entertain this idea? For starters, the balance of power and control between governments and corporations, especially transnationals, has shifted in recent decades due to globalization. Corporations have benefited from the absurd surrender of important incidents of state sovereignty to be able to act at times as though they were above local law. When their conduct becomes particularly egregious they may simply pack up and leave the fallout behind.

Some corporations, pipeline operators for example, spend lavishly to persuade the public that they're good corporate citizens whereas their track record is more befitting the fifth century Vandals who sacked Rome. Putting a leash on those hounds is probably not a terrible idea.

And, best of all, it might re-acquaint government with its fundamental progressive obligation to the public to regulate the sometimes conflicting interests of capital and the state, corporations and citizens. In an era of growing inequality where wealth and the political influence associated with it is migrating ever upward, isn't it about time for a little pushback?

Corporations have always held sway; witness the early Hudson's Bay Company. The big break for corporations came with the American 14th Amendment which was supposed to free the slaves. In practical terms, the 14th was used by railroads, such as the Southern Pacific, to sue for personhood rights. Over time, the US Supreme Court has extended the rights of personhood for corporations, the latest being no limit to political contributions.

As a sad side note, the 14th Amendment did not do much to advance the rights of the former slaves.

If we are to have any chance at all of controlling corporate bad behaviour we will have to revoke the notion of corporate personhood. We have to stuff the genie back into the bottle.


Citizens United is the US decision by which corporate powers, personhood, was extended to the right to participate in political affairs - everything almost short of outright voting. It was an act of total intellectual corruption of the judges who voted for the majority.

Corporate personhood is vital for a few limited purposes such as the ownership of property, the capacity to enter contracts and the ability to sue and be sued. Globalization, however, has pried the lid off that Pandora's Box and allowed powerful corporations, especially transnationals, to exploit many grey areas. I'm afraid there's not much we can do, beyond criminal sanctions we would be reluctant to use, unless and until we reclaim control over access to our markets.