Is that Geraldo? No, It's Some Guy Named Mark. 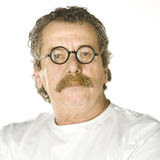 As I was glancing through various news headlines, I was caught by one reading, "The electoral treachery of Justin Trudeau." Turns out it was from the Toronto Sun. No surprise there, I expect, although I don't frequent that chain of rags and misery but sparsely.

I was surprised to learn that Canada has its very own Geraldo, our True North 'Moustache Pete' who goes by the name of Mark Bonokoski who apparently got re-purposed to a columnist gig, presumably a victim of the Sun chain's blessed fiscal misfortunes.

Anyway, I chose to learn more about Trudeau's electoral treachery. There's a loaded word, "treachery." According to Webster, it's "a violation of allegiance or of faith and conscience; an act of perfidy or treason."

As I read through Mr. Bonaduce's complaint, it was the usual overplayed hand that has become the hallmark of the Sun variety of journalism.  Apparently young Trudeau was "ripping apart our democracy's very foundation" by not holding a plebiscite on his proposal for electoral reform.

The Liberals, wrote the bespectacled buffoon, would "change our electoral system essentially by coup, using their majority as a truncheon and locking out the public as if inconsequential to the outcome of their unilateral treachery."

And then it struck me. Wait, first Mr. Trudeau will have to get past those 'meddlers' of whom the Tories so persistently whined during Beelzebub's Decade of Darkness, the ever vigilant guardians of the constitution, the Supreme Court of Canada.

Unfortunately Mr. Buttafuoco doesn't publish his email address. I would like to put at ease his overheated imagination that conjures up images of treason, coup d'etat, and despotic truncheons. With the looming demise of the Sun chain, I'm sure he has plenty of real problems to occupy his tortured mind.
Posted by The Mound of Sound at 5:21 PM