Why My Kids Have No Chance of Living Where They Were Born and Raised. 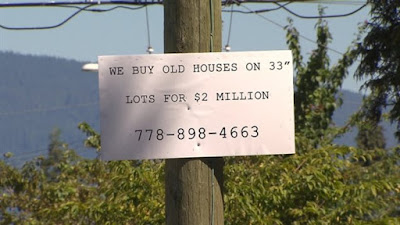 My daughter and son-in-law both work at good jobs in Vancouver. They live in a rented condo that's smaller than the cabin of some sailboats I've been on. That's Vancouver living today.

The house I bought 30-years ago for about $160,000 now goes for about 2.5-million or higher just for the land alone. The kids know they'll never be able to live where my daughter once nestled in her crib. Not a chance.

Those charming 40's bungalows are a thing of the past. Monster houses, McMansions, now spread from lot line to lot line. The lawns and gardens we used to carefully tend are gone. The place looks overrun, hideous.

Despite these massive, multi-million dollar houses, my old neighbourhood has become the poorest in Vancouver - at least based on reported income. Nobody there, it seems, makes any money. That's not to say there's any poverty, far from it. It's just that the money that might be taxed is offshore.

What infuriates so many older people is how many of these multi-million dollar residences - homes and high rise - stand empty. What's going on? Well, it's called "money laundering" and neither Ottawa nor Victoria wants to know.

It's a contagion that has also swept the tony cities of the United States.


...in an economic context, there is more to this new American urbanization wave than the return of the middle class, young upwardly mobile professionals and immigrants.

In fact, they increasingly find themselves priced out of America’s largest cities.

Instead, as has happened in London before, such cities are becoming playgrounds for the super-rich — and not only native ones. Foreigners are buying up high-end real estate in U.S. cities – and developers cater ever more directly to foreign buyers and investors.

Multimillion-dollar properties are often bought for cash and transactions are executed through anonymous offshore shell companies. Even among known owners, there are plenty of crooks and shady characters. Meanwhile, no one has any idea how those who prefer to remain hidden made their money.

No one cares, either. As long as the money is not related to Islamic terrorism, the U.S. government turns a blind eye to its provenance.

But, like all easy money, this massive international money laundering operation comes with considerable risks attached.

A year ago, a series of articles appeared in the New York Times, detailing how hard it is to identify who exactly the super-rich buying New York City apartments are.

The few that the Times dug out made a nice rogue’s gallery, with misdeeds ranging from corruption and malfeasance to tax evasion and suspected links to organized crime.

New York City remains the most outrageous example of America’s foray into money laundering. The southern end of Central Park has been turned into a veritable theme park for the global “one percent,” with apartments going for as much as $100 million.

...As to the damage which these keptocrats and criminals cause their native countries – be that China, Russia, India, Kazakhstan, Brazil, Colombia, Venezuela, Nigeria or any number of others – it is not America’s concern.

Savor the irony: The U.S. Treasury goes hard after Americans doing shady things with their money abroad, but it welcomes other countries’ nationals doing the same thing in the United States itself!

As Calvin Coolidge observed nearly 100 years ago, “The chief business of the American people is business.” It still rings true, but the nature of America’s business is constantly changing.

In Coolidge’s time, the United States was a manufacturing giant and it remained so until the 1970s. It gradually turned to services and information technologies by the end of the 20th century.

But now, with the emergence of a sizeable international class of “one-percenters” and increased flows of untraceable funds through the global financial system, America is emerging as a safe haven for the world’s super-rich and their money – honest and ill-gotten alike.

American officials understood that widespread corruption and thievery destabilizes the global community. Not so anymore.

As a result, the world is full of criminal gangs reaching across international borders and making alliances on different continents.

These gangs are able to move massive amounts of money. They also enjoy protection from kleptocratic regimes.

While the United States is fighting the old war against funding for Islamic terrorists, a new massive threat is quietly emerging under its nose.

And then there are domestic repercussions. Regional real estate bubbles are being inflated in many markets across the United States, even as home prices on average remain stable – and some regions are still depressed. New York is a prime candidate for a spectacular implosion.

...It is only a matter of time before disaster strikes overbuilt American urban centers, hitting developers and their lenders and burying ordinary people straining to pay their mortgages in overpriced markets.
Posted by The Mound of Sound at 11:27 AM

If the govt stopped the money-laundering, the housing bubble would pop, meaning house prices would fall, as would tax revenues.


The housing bubble, Hugh, is based on windfall profit. Windfalls are different than earned income and should be treated as such. The Scandinavians dealt with similar bubbles in the past. They concluded that housing was different from other assets. It was an essential component to community development and, as such, should be not be used as an asset base for collateral purposes, particularly speculation.

What they did was use the state taxing power to discourage owning homes for purposes other than residential accommodation. A resident was able to claim a residence - the place in which they ordinarily lived - and taxes on property value increases were minimal. If it was a second or investment property, however, appreciation was heavily taxed. They drove speculators out of the market and brought stability to housing costs.

Tax revenues can fall from the collapse of a housing bubble but that loss is minuscule compared to the social dislocation that the bubble inflicts on would-be homeowners. And, as I mentioned, how can a neighbourhood of 3-million dollar houses have the lowest reported income in a city the size of Vancouver?

What government can do is treat these indigent homeowners in the same way we treat other money launderers. Take the value of the property and work out what would be a deemed income for that property - how much one would need to earn to buy, maintain and occupy that home. Then, figure out an appropriate tax levy including penalties and interest for undeclared income. Put a tax lien on the house and pursue recovery. Because it is "deemed" it is open to the homeowner/occupant to prove in court that the property was not acquired through offshored and undeclared income.

Likewise the government can use tax levies to deal with the problem of vacant properties. If the owner doesn't occupy the property, make that individual liable for tax penalties. Deem it laundered money. Force the registered owner to account.

Property tax on a 3-million dollar house would be in the tens of thousands. Unpaid income taxes on the revenue associated with ownership of that house would be far greater.

Given that there's a revenue incentive to pursue this laundering and an enormous social benefit from a controlled collapse of the housing bubble it's hard to see how this could not be in the interests of government and the affected communities.

I agree, but at the same time, a return to normal house prices would mean the disappearance of $billions in phony wealth. I think govt is afraid of this happening. They want to keep the ponzi going.


Hugh, years back I did a lot of bankruptcy law. That gave me hands on experience in two of Vancouver's boom & bust real estate cycles. It taught me that wealth is notional, a reflection of market conditions. In other words, it's artificial. My house can double, triple in price but its value is still just great enough to buy the house next door.

Debt, on the other hand, is as solid as concrete. It never goes down. That has been the undoing of many young families who got into the market fearful of never having a house in which to raise the kids if they didn't only to see the house lost along with all their investment only to leave the mortgage deficiency in their laps.

Bubbles burst, they always do. They can burst because of a number of causes and we can't prevent them all. Which is why it's best to be proactive to discourage them forming at all. Higher minimum downpayments, legislation to target money laundering and speculation, there are many options.

Yes, it may cause the loss of billions in notional wealth but the government won't suffer. It doesn't hold that wealth and only gets to levy property taxes which have yet to make any municipality rich. There are better ways for governments of all levels to raise revenue than from artificially, even criminally, inflated real estate.

My kids have no chance of living on the planet where I was born and raised.

Yes, Steve, that's the ultimate truth. I no longer live on the Earth in which I was born and raised either. The difference is that my kids never knew that world.