I Heard They Were Breaking Up Anyway 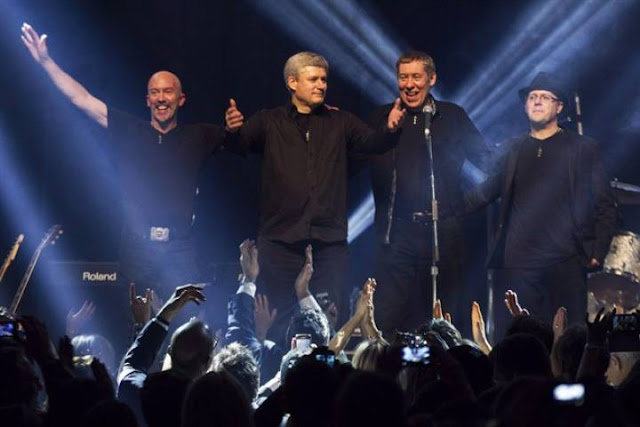 As if getting his ass handed to him in the October runoff wasn't bad enough, ousted prime minister Harper has lost his trusty drummer, Phil Nolan (the guy in the hat).

Nolan will be out of circulation for two years after being convicted of two counts of sexual exploitation of a 13-year old girl.

The lyrics are precious, especially the "touching me, touching you" bit.

However, if your musical taste runs to the tones of a cat being transformed into violin strings, here's the late prime minister desecrating The Rolling Stones as only he could.

full marks for consistency
like all things harper 100% horrible ....just horrible
abuse of democracy and country
abuse of children
funny how they find each other
but not really
if you look around
you can see them....they are everywhere
now the conservatives want to be "inclusive"
it is just looking for victims

Give him credit. He was every bit as able a musician as he was an "economist."

He sounds really bad! When he sang on his visit to Israel, I cringed. I think he does very little if any introspection, because like many other things he did he is not aware of how bad and pathetic he sounded and of course no one around him would have the guts to tell him. I can only imagine what Keith Richards would have to say. Probably something like "Listen mate do us a favour and don't sing our songs."