Judge Not, Lest Ye Be Judged 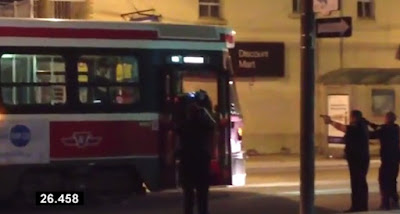 That seems to be the theme of closing arguments defence counsel Peter Brauti is delivering in the trial of Toronto cop James Forcillo charged with the 2nd degree murder of Sammy Yatim aboard a TTC streetcar.

Give him his due, lawyer Brauti is not playing with a very strong hand. He can tell the jury all the predictable lines about 'heat of the moment' and 'imminent threat' but there's video, a lot of video evidence, showing the leisurely execution of Yatim by Jimmy Forcillo.

Even had Forcillo's position been plausible - that Sammy Yatim, having never left the aisle of the streeetcar, having never so much as set one foot in the stairwell of the streetcar, represented an imminent threat to the life of not just the shooter but the gaggle of cops at his side some 15 feet away from Yatim and, hence, it was a lawful exercise of force he can't change the fact that the video shows Yatim went down, collapsed to the floor of the streetcar, with the first shot.

Yatim was down with the first shot. He never got up again. He was no longer a threat to anyone after the first shot. Yet Forcillo fired a salvo of three rounds into Yatim, the first shot and two more after the kid was down. Then Forcillo paused for five seconds before he opened up again on the still prone body of his victim, emptying the remaining six rounds in his pistol, eight of his nine rounds striking Sammy Yatim.

Ordinarily eight hits for nine rounds is a pretty awesome result only, in this case, at least seven of those eight hits were on a stationary target and they were fired at what, Forcillo claims, was a short enough range that he was in imminent danger from a kid with a small knife.

Brauti is telling the jurors not to get lost in the detail but to look at the big picture. What he's really asking them is to ignore all the inescapable evidence that shows this cop murdered that young man. He doesn't want the jury to judge his client's guilt. He wants them not to judge Forcillo at all because, after all, they're not cops and they weren't there.
Posted by The Mound of Sound at 8:46 AM

.. the inescapable is that James Forcillo represents policing today.. Far removed from the ludicrous policing events in the US of A in what is now referred to as 'an interaction' (fatal) .. not at all..

Forcillo fits the mold.. and his female partner with completely flawed memory of the traumatic event does too. They're closing ranks, muddying the waters.. blah blah woof woof.. I maintained in the past that Sammy Yatim was one half a collision seeking the other half.. and he found it.. RIP kid, you f'd up and ran into a f'd up cop. Forcillo walks, probably doe to his partner's bizarre testimony.. Its two cops vs a dead kid, and the young woman who was hysterical in the courtroom as a witness sealed the deal.

We really don't understand the selection process for cops or RCMP or spies. Hell we can't even figure out politicians.. or the litigation or 'justice' system. How else to explain Duffy/Wright taking years to go nowhere & the Immaculate Deception of electoral fraud? Law is plastic, fluid.. as is 'justice' or policing. The horror - to expect union cops to walk a local beat ! Or have common sense, courage & patience ! The G20 fiasco should have been a wake-up call, not an intense cover up. We had a Federal Government that went after our Supreme Courts via insult, ignorance, unconstitutional legislation and a bottomless legal budget. Media is hardly interested in exemplars - they want disaster, scandal & personalities - Kardashian style..

We should be crowd-funding Indy Journalists & bloggers.. & rejecting 'pay for newz' tripe from the Paul Godfrey's and Ezra Levant sellout partisan creeps. We need cold hard analysis, appraisal & facts - the bitter truth - not what comes out the rosy red rectum of what is posing as 'Mainstream Media' these days.. Sure there's still some serious journalists out there.. but fewer & fewer can call a dog a dog - and get away with it. Forcillo failed.. Worse, he failed horribly. He cracked Big Time.

I've been there, done it, got the T-shirt dealing with delusional teens whacked on drugs & booze and mood disorders. I had to go past surgeons, orderlies, nurses and copy into a surgery recovery room when I was 21 to get a super freaked speed freak out of the hospital - he was waving a scalpel.. and I can tell you, that kid could easily have overwhelmed me.. but he didn't. He saw a calm but stunned face (mine) and I told him we were leaving & nobody was going to get in our way, or stop us & they didn't. We got to Homewood in Guelph & they tucked him in. Did those Guelph cops have guns? You bet they did. But they 'got it'.. and were OK with letting make my play as a youth worker.. and the kid put the scalpel down on a gurney & we walked out..

There is no rational explanation for Sammy Yatim being shot down.. ergo we have an irrational police force in Toronto and elsewhere, in large urban centers. When I was a kid growing up on the farm, a local & kindly farmed told me 'don't mess with Johnny Law' .. I've always remembered that. And I raised my kid the same way.. A shame about poor Sammy Yatim - he fought the Law & the Law won ....

Hi, Sal. It's obvious that, but for all the video, Forcillo never would have faced any prosecution. It would have been a non-event, vouchsafed by Forcillo's fellow officers. It's no accident that the defence is based on asking the jurors not to believe their eyes, not to believe the video - the street video and the onboard security video from the streetcar.

One shot, even two shots in quick succession - arguable case. Nine shots, not a chance. Three shots, kid down, five second pause, six more shots. I can't see how any jury can ignore that second fusilade. Forcillo could have been soiling his dainties before he began firing but he had nothing to fear - nothing - after Yatim went down on that first shot. Nine rounds in the pistol magazine. Nine rounds fired. The only thing Forcillo didn't do is reload and plug the kid with another nine.

The use of excessive deadly force by US and Canada's police is rather unique in a developed world. My friendly bet is that that Sammy Yatim would live if this incident happened anywhere in Europe.
A..non