The Ghost of Liberals Past Stalks Justin. Lloyd Axworthy Tries to Salvage Liberal Integrity Before It's Too Late. 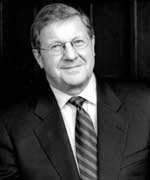 As Liberals go, there aren't many of the stature of Lloyd Axworthy, a stalwart of the era of Jean Chretien and a genuine progressive. Now Axworthy is calling out Justin Trudeau over the rancid Saudi arms deal and it's a welcome breath of fresh air.

A prominent former Liberal foreign minister is calling on Justin Trudeau’s government to review a controversial $15-billion arms deal with Saudi Arabia, saying he doesn’t think Canada should be deepening relations with a Mideast country notorious for human rights abuses.

Lloyd Axworthy, who served as foreign minister between 1996 and 2000 under prime minister Jean Chrétien, remains influential in Liberal circles.

He said he was surprised that Mr. Trudeau is being advised in briefing books to strengthen economic ties with Saudi Arabia because it would be good for business and Riyadh is an influential regional power.

Mr. Axworthy said a recommendation to “cozy up” to Saudi Arabia is “about the last piece of advice I would give,” particularly due to what he sees as Saudi Arabia’s worsening record. The country is notorious for its treatment of women, dissidents and prisoners. This month, Riyadh conducted a mass execution that included a prominent Muslim cleric.


“I think the Saudis have really in the last couple of years, really become a problem country,” he said. “The degree of oppression against women and dissidents in Saudi Arabia is becoming almost epidemic.”
The Trudeau Liberals are refusing to cancel a contract to provide hundreds, if not thousands, of weaponized amoured combat vehicles to the Saudi Arabian National Guard on the grounds that it would injure Canada’s reputation to renege on what they characterize as a done deal.

“I am a Liberal and I am supporter of Mr. Trudeau … and I am just surprised to see this unilateral declaration of, ‘We have no interest in examining or checking this thing out – or looking at it again,’” he said.

He said Canada has to consider the cost of lending support to the oppressive Saudi leadership.

“Everybody says it’s for jobs but I think if you start counting up the price you pay in terms of instability and repression and forceful maintenance of order, you may be paying a high price.”

Mr. Axworthy, who has spoken out in defence of Trudeau policies, such as the mass intake of Syrian refugees, said the Liberal government’s unwillingness to carefully examine the armoured vehicle transaction is unexpected.

“Trudeau has stated so many times that the key to Canadian foreign policy is respect for others and to adhere to basic standards and rights,” he said.

“To me this whole thing is an anomaly. Frankly, I don’t get it – the way in which the Saudi thing has been handled.”

“One of the things the government has to maintain is its commitment to what I would call probity – doing things right.”

He also advised the Trudeau government to rethink the state of Canada’s ties with Saudi Arabia. “It’s time we really had an examination of this relationship. Because until countries start doing that ... until that starts happening, they [the Saudis] are going to behave with impunity.”

Make no mistake, that's an intensely murderous impunity to boot. Not for nothing did the UN General Secretary call out Riyadh for war crimes for blasting Yemeni civilians with cluster bombs.  Tally it all up from Saudi support for Islamist terrorism - al Qaeda, al Nusra, ISIS, to its oppression of its own women and dissidents, to its brutal repression of Shia populations in neighbouring states all the way to pretty blatant war crimes and what Liberal with the merest shred of conscience would advocate strengthening economic ties with those animals?

At times Harper made me deeply ashamed of my country. I never expected the same from Justin Trudeau.

Axworthy's article is bound to spark greater public debate on the whole deal, Mound. When someone of his stature speaks out, people listen. The absence of information about the deal (has an assessment for the export permit even been done?) is shocking and appalling when placed in juxtaposition to Trudeau's rhetoric open transparency. We, as Canadians, have every right and obligation to ask some hard questions.

I heard Axworthy's very position expressed to today by someone expecting better of our country's new leadership. To which I add a loud, agreeable, "No shit!"


The thing is, Lorne, I'm not much interested in debate. I expect a Liberal Party to be progressive and that requires integrity and courage. I saw that in Pierre Trudeau and, for 40-years I was a faithful supporter of the LPC. I abandoned the party when it fell to Ignatieff, not that I was fond of Dion. I stayed with the Greens because I thought Justin was no successor to his father. He's proved me right. I don't know if you've read Alison's summary at Creekside but, if you're a Liberal supporter, it's a "must read."

We may not have party status in Parliament but there's only one movement that retains what I consider Canadian integrity - the Greens.

I can only imagine what it took for Lloyd Axworthy to break ranks with the Trudeau Liberals but it is a measure of his courage and their - well, you know - that convinces me this party and its sycophants is of no use to Canada. What saddens me most is that the Mulcair Latter Day Liberal NDP are on the very same page.

I'll fight them from the Green. Hope you'll join us.

Jeez Mound just wtf did you expect from a shiny new penny backed by legions of "old liberals" who sat out the last ten years and then waltzed back in full of entitlement and pride as if the interregnum had never happened?

Just another passage in the world of Libs who will be exhibiting no shame and all the old ways.

Liberal Tory same old story, Mulcair and his warts - read no baggage, look pretty good now even if you don't like the man. A watered down "third way" (which I despise) tempered by the remaining left in the NDP would not have been behaving this way.

You can now expect the shiny one to endorse a pipeline to the coast too.

Apparently a free trade deal with China hinges on that as well as investment opportunities.

Just like Saudi Arabia there are apparently no human rights abuses there either.

This is all going to turn out for us like Obama turned out for US progressives.

The economy 'needs' to grow, every year, infinitely.

.. seeking a decent analogy for the current conundrum of where the steady hand of a mail clerk & duplicious narciccistic dweeb named Stephen Harper has steered the country called Canada. Perhaps a ponderous ship upon the seas is apt. Harper was last seen on the far horizon in a sleek well stocked pinnace with his loyal officers as a new skipper and fresh crew was rowed in to take command of the ship, any remaining crew and a boatload of paying passengers (that would be us)

The good ship Canada Eh was attempting to gain headway offshore of a thundering lee shore against disastrously unfavorable winds and tides. That the previous self styled 'skipper' was a fool is now longer in question, nor that his so called crew formed a ship of fools.. as they all played the unwitiing passengers for fools and put the ship at dire risk.

I don't care who a new skipper is, unless they can recognize the danger of an overloaded passenger ship, leaking at the seams, sails frayed, worn rigging and mistakenly believed to be a Man o War. Jettison the cannon and powder, pump the hold, inspect the creaking or rotting timbers, ask for any passengers that can assist the crew.. and get the damn ship ready to turn up into the wind and tack and tack again to escape that lee shore.. gain sea room for gawds sake..

I'll leave it at that.. analogy.. Certainly the incompetance and arrogance.. the deceptions of the previous captain and crew and those ashore who used him for their own mercenary reasons, need to be understood and revealed, but for now the passengers need to understand how dire their prospects are.. and demand a course be set that in every way, looks after and ensures their safety.

The good ship Canada Eh is not sailing to China overladen with plunder.. it is not going off to somebody's 'good old fashioned war' or delivering arms to the Shiek of Arabia.. nor does it fly the flag of Israel.. and last I looked, there were no stars or stripes stitched onto the ship's colors

I think governments are guided by their terror that the economy is not growing. GDP growth is how they deal with the growing debt.

In addition, the Bank of Canada targets inflation at 2%, that way the debt becomes more manageable. Ok, but if your income doesn't rise by 2% every year, you're falling behind.

It's all driven by the need to manage the massive, ever-growing debt. The whole system is f@cked up.

Hello, all. I read an interesting analysis on The Globalist web site this morning that suggests the House of Saud is in mortal danger, facing revolt, much as what toppled Iran's Shah Pahlavi forty years ago. Faced with insurrection, the royals have been arming their forces to the teeth and, in the process, lavishing vast sums of money around certain Western countries to buy their support - and silence. This has led to a corrupted, "monetized" foreign policy.

While this may be happening in the States, it's eerily similar to what's gone on with the Canadian armoured vehicle deal.

Dion, ever the bungler when it comes to spin, went out of his way to unconvincingly insist the Saudis have assured Canada they won't use these weapons against their own people.

I would not have raised an eyebrow to the suggestion that Harper's foreign policy could be bought for enough cash but I'm distressed to think that the new, principled Liberal government could succumb so quickly and so effortlessly. That's a pretty lousy omen of what may lie ahead.